Critics of the President from both the Left and the Right have been decrying the possibility of American military intervention in Venezuela. As the country collapses under the weight of the socialist dictator, Nicolas Maduro, roughly six percent of the country’s population has fled Venezuela’s political instability, creating massive refugee flows that are destabilizing our hemisphere. Meanwhile, Maduro’s allies in Russia, China, Iran, and Cuba are attempting to coalesce around the failing Maduro regime as rumors swirl that the “Yankees are coming” to take Maduro out. Nothing could be farther from the truth. Yes, the United States has slightly increased its modest military presence in Latin America in response to the threat that Venezuela’s growing instability poses, but that has more to do with the fact that the United States is interested in being a good neighbor and less to do with a alleged quest on the part of President Trump to remove Maduro.

Since the end of the Cold War in 1991, the United States has engaged in a dizzying array of global military endeavors loosely predicated upon the concept of “humanitarian intervention.” From Somalia to Haiti to the Balkans, American military force has also been used to topple unsavory dictators, in an attempt to install human rights-respecting democracies. These actions were taken under the gravely flawed assumption that democracy automatically alleviates human misery and authoritarian political culture. Of course, in most cases, democracy promotion at the end of a gun barrel did little more than foster greater instability and, at times, made more enemies for the United States.

Aside from the iconoclastic Senator Rand Paul (R-KY), Donald J. Trump was the only presidential candidate in 2016 who made a sport out of demolishing the neoconservative shibboleths that had defined mainstream Republican Party politics since George W. Bush’s presidency. Trump, a noted critic of the Iraq War–as well as a skeptic of military interventions in general–proved that most Republican voters, as well as a majority of the American people, disliked the military adventurism of the GOP elite as well. Long before he ever announced his candidacy in 2015, Trump was an opponent of injudicious military action abroad. As a conservative nationalist, Trump favored the re-creation of a robust military that would only be used to defend legitimate and vital American interests. He has continued this policy while in office, defying expectations that his administration would be forced to expand America’s military operations in Syria. The President has also made preparations to ultimately begin drawing down American forces in Afghanistan, even reaching out to the Taliban to begin negotiations.

So, it makes little sense that the President would be gung-ho to jump into an intervention in Venezuela. Unlike his predecessor, though, the President is not a dove. As he has demonstrated throughout his two years in office, President Trump will use limited force when necessary. Should Venezuela take actions that threaten American forces or interests in the Western Hemisphere, only then would his administration consider a military strike on Venezuela. But we are not there yet. At the same time, though, the President recognizes that the status quo in Venezuela cannot persist. This is why he has reached out to our partners in South America, such as Brazil and Colombia, and is working to limit the pernicious influence of foreign actors in Venezuela, while empowering the local actors. In essence, Venezuela is a test of the Trump Doctrine. This doctrine is not a warrant to invade any country Washington dislikes as the Bush Doctrine often ended up being. Instead, it is a careful balance between using force and using non-military means to protect–and further–American national interests.

In other words: America First.

The Trump Administration will absolutely assist those who assist themselves. Thus, in Venezuela, the United States has voiced support for the anti-Maduro movement as led by Juan Gaudio. But, don’t expect American warplanes to be buzzing over Maduro’s head in Caracas or for U.S. Marines to be battling Venezuelan military units on the streets of Caracas. Ultimately, the decision to keep Maduro in power or not is up to both the Venezuelan people as well as Venezuela’s closer neighbors. The United States will not pick winners and losers. All it can do is to support the right side of this conflict–which, in this case, is the Venezuelan people, (as well as the Brazilians and Colombians).

Don’t listen to the Fake News Industrial Complex. President Trump is a non-interventionist and he won’t be sending your sons and daughters to Venezuela to do battle any time soon. 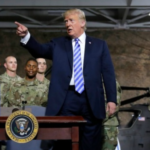 No, President Trump is Not Invading Venezuela