For years, the Democratic Party has made it their mission to smear Republicans of all walks of life as being nothing more than bigots, haters, misogynists, and anti-Semites. Of course, this is not true. But, unfortunately, the libel has stuck in the minds of many people. Republicans have long accused their Democratic interlocutors of being the real bigots and anti-Semites. Since the 2018 Midterm election, which saw the elevation of the most radical “democratic socialists” into office, these claims have been validated. In particular, the new darlings of the “Fake News” Industrial Complex–Democratic freshmen Representatives Ilhan Omar, Rashida Tlaib, and Alexandria Ocasio-Cortez to name just a few–are virulent anti-Semites.

By now, we’ve all heard about the vicious tweets Representative Ilhan Omar (D-MN) issued over the last six years regarding Israel and the (according to her) malign influence of Jewish groups in American politics. When elected, Representative Rashida Tlaib (D-MI) stood proudly in front of her congressional office’s official world map and was photographed smiling as she placed a Post-It Note right over Israel which had written in bold red ink the word, “PALESTINE.” For her part, Cortez has aligned herself with radical anti-Jewish and anti-Israeli groups and made anti-Israeli statements throughout her strange rise to stardom in the Democratic Party.

All three of these members are also proud supporters of the Boycott, Divestment, and Sanction (BDS) movement which seeks to have the United States cut off and punish a fellow democratic state which is also under constant threat from radical Islamic terror–Israel–in order to empower the very same terrorists both the United States and Israel are waging war against. Despite the fact that she has been consistently, publicly called out for her extreme position on the tiny, free nation of Israel, Ilhan Omar has doubled-down on her previous anti-Semitic stances. As the United States Congress prepares to make its annual trip to Israel (courtesy of the bipartisan pro-Israel group, AIPAC), Ilhan Omar tweeted an Anti-Semitic statement out to Republican House Minority Leader, Kevin McCarthy of California, saying that the trip was “all about the Benjamins” for McCarthy and his fellow travelers to the Holy Land.

A pernicious, age-old anti-Semitic smear that has been bandied about Jewish people is that they use their vast sums of wealth to buy the loyalty of non-Jews, in order to negatively impact whatever country they are living in. Ilhan Omar has long sullied herself and the Democratic Party by proliferating such racist tropes on the internet. What’s shocking is that she continues doing so, despite being in a high elected office; despite the fact that she’s a member of the prestigious House Foreign Affairs Committee, who routinely receives classified intelligence on the threats that Israel is facing; and that she is now–as a freshman Congresswoman–going after the highest official of the opposing party in the House in such a visceral way.

Democrats not only get treated differently by their fellow officeholders for being disrespectful, they are also held to a different standard by the media. Omar is upset that a legal, pro-Jewish group is taking a bipartisan group of American lawmakers to Israel, in order for them to see that which free Jewish people have built in a land lacking major natural resources, while being surrounded on all sides by countries that want to eradicate this small, pro-American democracy.

In response to Ilhan Omar’s egregious tweets about AIPAC and Israel, Omar’s own party leaders–led by the Speaker of the House Nancy Pelosi (D-CA), took to the presses to denounce her blatant Anti-Semitism. Although, Representative Omar has yet to apologize for her remarks. And, for all of the consternation from the Democratic Party’s leadership, they have yet to remove Congresswoman Omar from her prestigious committee assignments or take any real action to discipline her for her obscene Anti-Semitic comments.

The Left defends Omar saying that she is merely stating the obvious about a lobbying group (AIPAC). Omar attempts to castigate Kevin McCarthy and other lawmakers who are taking the trip as their being influenced by AIPAC (the implication being that she is not influenced by outside sources and therefore she must be above such factors). But, few acknowledge that pro-Palestinian and pro-Islamic groups have major influences over American politics as well. The idea that the pro-gun groups, pro-Social Security groups, and pro-Palestinian groups should be allowed to continue lobbying the government, but pro-Israel and pro-Jewish groups, such as AIPAC, should not is anti-Semitic.

Ilhan Omar has held herself up as the “Democrat of the future.” In many respects, she is. Omar is relatively young, she has little experience, it’s not clear what, exactly made her qualified to gain high office; she is an avowed socialist, and she disdains the Jewish people and denies their right to lobby the American government. The Democratic Party has always held extreme views on the major issues, but, in the past, they were considered a safe place for American Jews. With the rise of the Democratic House Freshman Class of 2018, this false narrative about the DNC is shattered. 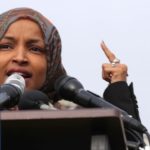 More Anti-Semitism From the Democratic Party