Senator Kamala Harris (D-CA) has been championed by the Democratic party as a great defender of women’s rights. In fact, some have publicly likened her to a female version of Barack Obama. On paper, Senator Harris would seem to be a competitive politician. She graduated from Howard University as well as the University of California, Hastings College of Law.

Harris’ rise within the Democratic Party has been extraordinary: beginning her career as a San Francisco prosecutor in the 1990s, she has worked her way through the competitive California Democratic Party system and ended up as the junior senator from California who recently announced her bid for the presidency in 2020. But, there are some deeper questions that have arisen over the years about how, exactly, Harris rose so rapidly to national prominence.

Writing in an Op-Ed in California, Willie Brown, the disgraced former mayor of San Francisco and a notable Democratic Party powerbroker, admitted that he and Senator Harris had an illicit affair in 2002. At the time, Harris was a young prosecutor looking to make a name for herself. Brown was a powerful Democratic Party leader—he was also 30 years her senior and married.

Undeterred by Brown’s marriage, Harris engaged in an affair that conveniently resulted in her being named to two prominent city boards in San Francisco. By the time their affair ended, Brown had opened up his rolodex to Harris and she had made key connections with other Democratic Party notables. She ultimately became the district attorney and continued up the political ladder, leaving Mayor Brown far behind her.

Senator Harris’ supporters have long touted her commitment to women’s rights. But, it is important to note that this noted supporter of equality for women—of getting a purportedly male-dominated world to view women as peers—benefited most from an extramarital affair that she had with a much older, more powerful man. Once in his good graces, Harris then exploited Brown for every available political contact and resource that he had at his disposal, not as his professional but his mistress.

Yes, Kamala Harris was a good student and went to competitive schools. Yes, she landed at a plum job after graduating law school. And, no, there is no guarantee that, without her sexual relationship with Harris, she would be where she is today.

The Democratic Party has been in an existential crisis since the “surprise” (according to them) election of Donald J. Trump to the White House in 2016. Desperate to deploy to any talking point they can that would potentially harm Trump’s reelection chances, the Left has defaulted toward identity politics yet again, and the “Me Too” movement when necessary.

Both of these concepts are corrosive as a viable political strategies.

The underlying point is to reinforce the popular narrative that President Trump is both a racist and a misogynist. The Left believes that figures like Kamala Harris will be able to draw a stark distinction among voters between their party and the Republicans in 2020.

The Left is wrong. Kamala Harris may talk a big game about protecting the rights of women everywhere; she may claim that she wants women to be judged not by their looks but by their character, yet her own personal actions undermine this message. Would Kamala Harris be a powerful senator running for the presidency of the United States if not for the fact that she had a affair with the well-connected, powerful, much older and married Willie Brown?

How is the women’s rights movement best represented by a woman, like Kamala Harris, who used her sex to advance her career? Harris, to say the least, is a hypocrite. What’s more, her actions run contrary to her words about women being equal. If Harris really believed her own rhetoric, then why didn’t she rely solely on her skills and education to climb up the career ladder? Why debase the call for equality by achieving advancement between the sheets of a powerful man’s bed?

And, if Willie Brown did aggressively pursue her, why didn’t she choose to rebuff his advances and call the former mayor out for sexual harassment?

Harris’ defenders might point to the inherent disequilibrium in her relationship with Brown. But, that would be a cop-out on their part. If Harris was a true believer in women’s rights rather than a poseur, she would have stood on principle and made Brown pay for his inappropriate actions toward her.

Instead, Harris rewarded Brown’s boorishness so as to ensure that she moved forward on the path to power. Harris’ entire career is a testament to the Democratic Party’s abandonment of real women’s rights in favor of its pursuit of raw power. 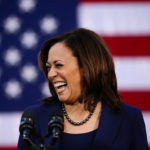 Kamala Harris and the Extramarital Affair Which Made Her Career Possible