During the 2016 presidential election, Donald J. Trump distinguished himself from his Republican rivals during the primary by speaking very frankly about the world. Whether it be the issue of illegal immigration, defeating ISIS, or dealing with China’s nefarious trade policies toward the United States, he never backed down from telling voters the way he viewed America’s most pressing problems and how to solve them. With this one candidate, the average American was going to get an honest statement from a non-politician.

Consequently, from his first day running for president, everything about candidate Trump rankled the politically correct “Establishment.” One moment during the early days of the 2016 Republican presidential primary, in particular, set off alarm bells among America’s self-anointed elite: the day that Donald Trump responded to criticisms from Senator John McCain (R-AZ), who had attacked Trump’s comments about illegal immigrants during his campaign announcement several weeks before. On that day, Donald Trump–who was taking incoming attacks, both on a political and a personal level–responded to McCain’s attacks by being blunt about McCain’s Vietnam War record. From that point onward, Donald Trump was marked for destruction by the elite.

It was less that Mr. Trump had disparaged Senator McCain and more the fact that he did it in such a candid, and unapologetic way. Trump routinely told his opponents that he was a “counterpuncher,” and if someone came at him, he would reply in-kind–maybe even going a little farther in his response, so as to deter future attacks. But, John McCain, unlike Donald Trump, was considered part of America’s untouchable, sacred, political class. Trump was a bull in a China shop; breaking all of the shibboleths that have dominated America’s calcifying political system for so long. McCain, who had never liked Trump, smiled and opted for a longer-term covert strategy of destruction. Despite the attacks on McCain’s service record, the late senator tepidly endorsed Trump when he was nominated to be the Republican presidential candidate. Yet, that endorsement was hardly ringing.

What’s more, it was a poison-pill endorsement.

At the same time that McCain was appearing to let “bygones-be-bygones”; while he was endorsing and standing by Trump, McCain sent one of his top aides on a desperate flight to London. Why? Because McCain had become aware of a “dossier” that had been compiled by a former British MI6 intelligence agent and Russian specialist, Christopher Steele. The report allegedly contained the “truth” about Donald Trump’s illicit connections to Russia, and its autocratic and kleptocratic leader, Vladimir Putin. Unable to swallow that Trump’s campaign rhetoric was just that, political brinkmanship during a tough primary, McCain helped initiate the greatest political witch hunt in the modern history of our republic. Together, with his former Democratic Party “rivals,” such as former President Barack Obama and the 2016 Democratic Party presidential candidate, Hillary Clinton, McCain operated as an insurgent from behind the political battle lines: pushing the salacious dossier into the waiting hands of Trump’s foes.

It did not matter that the dossier was unvetted. It also did not matter that the dossier was initially created after anti-Trump elements within the Republican Party paid Fusion-GPS, an opposition research firm headed by Democratic Party members who were also full-time DOJ officials, such as Bruce Ohr. What mattered was that John McCain was going to exact his vengeance upon Donald Trump for having questioned his untouchable status. The fact that McCain, rather than respond to Trump’s attacks–counterpunching, as Trump called it–opted to instead lay low; let the Trump Campaign gain momentum, and then attempt to cut that momentum off at the last possible moment with propaganda from overseas implies a degree of maliciousness unbefitting a former United States Naval officer. After all, McCain had claimed that he had moved beyond Trump’s attacks. He had indicated that all was settled between the two of them. Instead, he bitterly clung onto his grudge against Trump and tried to subvert him.

Because Senator John McCain, the 2008 Republican Party presidential candidate, was effectively endorsing the false dossier, the Obama Administration intelligence services–notably the FBI and CIA–giddily opened up a counterintelligence investigation into Donald Trump and his closest associates. This role was pivotal since McCain gave cover to what was clearly a politically-motivated investigation initiated only because Trump was now a threat to the political class’ preferred presidential candidate, Hillary Clinton. It is unlikely that Senator McCain ever truly believed that the evidence manufactured for the Steele Dossier, or that it was worthy of the attention of the U.S. intelligence community. Instead, he just wanted to sabotage Donald Trump’s chances against Hillary Clinton.

Once Trump became president, however, McCain never stepped in or tried to rein in what had by that point become a totally out-of-control investigation. All that mattered was making Trump pay. McCain, a man who had spent his life fighting to become a part of America’s postwar privileged elite, was now fighting desperately to ensure that a perceived uncouth ruffian, a real estate tycoon from Queens, would never govern effectively once in office. It is unlikely that without McCain’s initial backing, the Russia Collusion Delusion would have lasted as long as it has (or even started). As the “investigation”–or persecution–has progressed, more and more information has emerged showing how much of it was based on a total lie. But, the bureaucratic wheels were already in-motion by the time these new revelations were made. Because of the investigation, the outgoing Obama Administration was able to gaslight both the intelligence services as well as the Fake News Industrial Complex into believing that Trump and his team were working for Putin and Moscow.

With the investigation underway, then-President Obama was able to draft new rules for the dissemination of raw intelligence, making it harder for his successor to enforce the previous standards. The Obama Administration’s Deputy Assistant Secretary of Defense for Russia, Evelyn Farkas, bragged on Morning Joe in 2017 how she and other former Obama officials “hid” parts of the Russia investigation deep within the federal bureaucracy, in an attempt to ensure that the incoming Trump Administration could never end the investigation. All of this happened, thanks to the Steele memo McCain pushed. A tissue of lies only given any credence, thanks to a vengeful Senator John McCain.

This is the only legacy the late Senator John McCain now has. He was a sad, old man who was initiating a federal counterintelligence investigation against a political foe, based on an utter fabrication dressed up as a “dossier.” 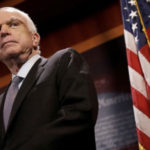 John McCain Was the Admiral of the Never Trump Movement