Ronil Singh, a corporal in the Newman, Calif., police department was recently murdered by an illegal immigrant while conducting a routine traffic stop. Singh left behind a loving wife and a beautiful, five-month old baby boy. The illegal immigrant who shot and killed Corporal Singh was known to California law enforcement. Not only did the illegal immigrant have a criminal record, but he also had deep ties with a local street gang.

Sheriff Adam Christianson gave a moving goodbye to Corporal Singh in which he castigated California’s current sanctuary city laws that prevented his department from having federal authorities deport Singh’s killer. As the national debate over illegal immigration has heated up, the Democratic California Governor Jerry Brown (as well as a retinue of other California Democratic Party leaders) have intensified their commitment to turning California into a sanctuary state.

Yet, these Democratic leaders have not had to pay the price for their radical agenda. Instead, those who’ve been made to suffer with those consequences are innocent, middle-class Americans, such as Corporal Singh. His wider community has also been made to suffer as increasing numbers of illegal immigrants with malign intentions take to the streets of their once-bucolic small town, increasing the risks to the citizens there and raising the level of criminal activity there as well.

Reports suggest that Singh’s murderer was aided by seven other illegal immigrants. He was arrested almost 200 miles outside of Newman, Calif. in a failed attempt to cross the border back into Mexico. Meanwhile, Corporal Singh is by far not the only American who has been killed by an illegal immigrant. According to data released by the Immigration and Customs Enforcement (ICE) agency, in 2018 made 158,581 arrests of illegal immigrants.

When broken down by crimes committed (aside from the fact that these individuals were in the United States illegally), there are 542,798 criminal offenses among that 158,581 illegals arrested this year alone. If one were to look closer at the severity of the crimes committed, you would see that 80,730 of these crimes were DUI traffic offenses. This statistic is important because a vast number of Americans have been killed or maimed by illegal immigrants who were driving under the influence of intoxicants.

Another horrifying statistic is that 11,766 of the criminal offenses were gun-related (illegal immigrants possessing illegal firearms). A sad example would be the murderer of Kate Steinle, who had an illegal firearm and fired it on a San Francisco pier, randomly killing California native Kate Steinle in front of her father. 5,350 of these crimes were sexual assaults. Another frightening statistic is that 2,028 of the arrests were based on charges of direct homicide in 2018.

The crimes were perpetrated against Americans of every ethnic, religious, and political stripe. The commonalities were that the Americans who were victimized were innocent, were themselves legal citizens, and entirely undeserving of their fate. While giving his press conference about the successful apprehension of Corporal Singh’s murderer, Sheriff Christianson rightly blamed California’s sanctuary laws as being the real culprit for why Corporal Singh’s family will have to bury this promising young man, cut down in his prime by a criminal who had no business being in the country whatsoever. It isn’t just police officers who are made to suffer at the hands of not only violent illegal immigrants but also unjust, politically-charged laws designed to protect illegal immigrants at the expense of actual American citizens.

This is what President Donald Trump is trying to change. And, this is precisely what incoming Democratic Speaker of the House Nancy Pelosi of California and Democratic Senate Majority Leader Chuck Schumer of New York are fighting to keep in place. Illegal immigration is not just a phenomenon concocted by Right-wing racists, as the media would have you believe. In fact, illegal immigration is the result of years of policy and legislative malfeasance on the part of American elites whose gratuitousness has led to the horrific levels of criminality and death as exemplified by the recent slaying of Corporal Ronil Singh (and so many other innocent Americans). 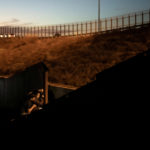