Last week, the freshman Congresswoman from New York City, Alexandria Ocasio-Cortez, made more headlines for herself when she announced the Green New Deal as official Democratic Party policy. The Green New Deal has been an ongoing fantasy of the American Left since at least 2009. But, never before has any elected officials been serious about the a plan as expansive as the GND (outside of a handful of radicals, like Senator Jeff Merkley, who supported a similar bill that was barely passed in the waning days of the Democratic-controlled House of Representatives in President Barack Obama’s first term but then died in the Senate).

Today, however, is a new dawn for the Democratic Party. After having been eviscerated in 2016 by Donald Trump’s supposedly “unlikely” presidency, the Democratic Party has flailed about looking for something–anything–to glom onto and use a cudgel against Trump’s seemingly unstoppable MAGA agenda (other than the Russia collusion lie–which fewer Americans are buying, the longer the Left perpetuates it).

In 2018, thanks to the fact that the Republican Party establishment still hadn’t recovered from Jeb Bush’s loss in 2016 to Donald Trump, and many long-time elected GOP leaders in the House opted to retire from their offices rather than continue serving under a president they despised almost as much as the Democrats did. In key races, the advantages usually reserved for the incumbent were lost, as new faces from both parties battled for control over their respective districts.

The new Republican faces, in many cases, refused to embrace President Donald Trump despite the fact that he had already achieved 64 percent of the Heritage Foundation’s Conservative agenda by his second year, making Trump the most conservative president since Ronald Reagan. The new Democratic Party candidates, on the other hand, had embraced the most radical elements of the Left’s political orthodoxy.

We’ve previously detailed the Democratic Party’s slide into institutionalized anti-Semitism. Now, we must look at their most ambitious policy proposal to date. Alexandria Ocasio-Cortez has become the de facto face of the Democratic Party much to the chagrin of the current Democratic Speaker of the House, Nancy Pelosi. She is young and savvy about social media. Cortez also has a strong following among the activist base of the Democratic Party. In 2016, she partook in the high visibility protests that were aimed at preventing the eponymously-named “Dakota Access Pipeline” from going into operation based on the belief that it would damage the environment. It was here that Cortez says she acquired some of her strongest ideas about the environment.

In a later interview with the Justice Democrats, a “non-profit” group encouraging the implementation of the Green New Deal, Cortez claimed that there was a straight line from her experience as an activist fighting against the pipeline in 2016, to her volunteer work for Senator Bernie Sanders’ (I-VT) failed presidential bid, to her ultimate decision to run for the United States House of Representatives.

Despite having “Green” in the title, though, there is little economic logic or environmental protection involved in Cortez’s “Green New Deal.” To quote Michael Bloomberg, it is utterly  pie-in-the-sky. For Cortez and her comrades, it is vital to protect the environment from the pollution of fossil fuels. Yet, their alternative to fossil fuels are the “renewable” sources of energy, primarily wind and solar. Of course, these policies have been tried elsewhere–and each time renewable sources of energy fully replaced non-renewable fossil fuels, the costs for ordinary people reached unaffordable levels.

It’s strange that Cortez and her comrades  on the Left have presented themselves as wardens of advanced science. After all, basic data analysis proves that there is nothing good about a Green economy. Everything is more expensive, energy production is less reliable, more people are made poor, and society tends to simply slow down and become egregiously inefficient. Meanwhile, the obsession with wind and solar illustrates how un-serious the Greens are in their quest for a sweeping Green economy. The only viable, potential alternative energy source to fossil fuels is nuclear energy. And, that is the one other major energy source that Cortez wants to abolish.

Then, there are her calls for sweeping infrastructure changes.

Namely, the GND says that it will fully employ Americans over a decade by charging them with tearing down every building in America and replacing them with environmentally-friendly buildings; Cortez also wants to restructure the infrastructure in the country in order to make it more resistant to rapid climate shifts; the GND–despite what its proponents have been caught lying about–demands an end to all air travel within a decade and replace it with high-speed, electric-powered trains. All of these things have been tried at various points either in this country or elsewhere, and all of these measures have proven to be costlier and more harmful to the countries that embrace them than any potential environmental damage caused by fossil fuels.

The ubiquity of air travel is an essential element for the country’s modern, high-speed global economy. Given the experience of California with their own attempt to build a high-speed rail–which has gone billions of dollars over budget and has run far beyond the planned end date for the project, with no end in sight for the project–it is more than unlikely that the United States would be able to build enough high-speed rails that could replace air travel. But, the Greens will persist.

This is not about bettering the economy or protecting the environment. This is about punishing the United States for having been a polluter in its past. It’s also about bringing the country down to size, in order to give other, “less fortunate,” countries a chance to better compete with the United States. The Greens are more interested in virtue-signaling to the world their desire to save the environment as a means to contrast their judgmental  image of our nation as a corporatist hive of gluttons  spewing hate and pollution across the world. It’s an inherently selfish worldview, one that will cost you and your family huge amounts of money and your freedom. The Green New Deal is designed to effect a total government takeover of our country that our freedoms, economic prosperity, everything we cherish about our system will be determined by government administrators.

Green has become the new Red. Don’t fall for it. The “Green New Deal” is actually a watermelon. Green on the outside, Red on the inside. Alexandria Ocasio-Cortez once said of herself, the Greens would rather be “morally right rather than factually correct.” In this case, they are neither. The new Green-Red menace must be renounced and politically defeated, not championed and congratulated for their whimsical fantasies about saving the planet from a fake problems. 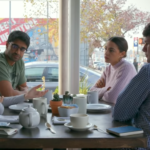 Green on the Outside, Red On the Inside: AOC’s Fantastical Green New “Deal”