Recently, news circulated that the Trump Administration was seeking out negotiations with the Taliban. The goal of any negotiations would be about ending the 18 year-long War in Afghanistan and allowing for the United States to bring its troops home. Many in Washington, D.C.–from both political parties–are decrying this desire on the part of the president. Never mind that ending America’s interminable post-9/11 conflicts was a key tenet of President Donald J. Trump’s 2016 campaign, America’s ruling class in Washington has been opposed to ending the conflict since the George W. Bush years.

Of course, there are some legitimate concerns about reaching out to the Taliban. First, the United States military has been engaged in combat against the Taliban since our forces first invaded in 2001, following the horrific 2001 attacks. Second, many American troops have been killed and wounded in combat with the Taliban. Third, despite their putative promises to respect any postwar political settlement, the Taliban have yet to either fully acknowledge the U.S.-backed central Afghan government in the nation’s capital, Kabul, or to even significantly slow their operational tempo against American forces and the forces of America’s partners. Fourth, there is no guarantee that, should the Taliban and the Trump Administration reach a negotiated settlement that saw the withdrawal of most American forces from Afghanistan, the Taliban would not seek to mass their forces against the weaker Afghan government forces, and attempt to retake the capital as they did in the Afghan Civil War of 1996.

All of these things are on the minds of the leaders of the Trump Administration. Yet, the fact remains that the United States has tried almost every other military option in Afghanistan. Over the course of three presidential administrations, the United States has surged into the country; conducted a counterterrorism-only mission; expanded that mission to include the unsuccessful concept of counterinsurgency and nation-building; and surged forces into Afghanistan again during the Obama years.

Despite the best efforts of the Washington “elite,” the conditions on the ground have only become moderately better. Earlier this month, the United States passed a sad benchmark: our national debt reached $22 trillion. Analysts calculate that the United States has already spent upwards of $1.4 trillion on the wars in Afghanistan and Iraq since 2001. The United States simply can no longer afford to keep sinking money that it doesn’t have into a country that, regardless of what is tried, cannot improve. It is unreasonable to expect the United States government to spend trillions of taxpayer dollars–keeping forces stationed in Afghanistan over the course of decades–in order to build out that country’s infrastructure, to assist in the stabilization of Afghanistan’s chaotic political system. After all, where roadways in Afghanistan end, the Taliban begins.

Why should we waste time, money, and the lives of our gallant American troops for such a feckless and reckless mission?

When the United States invaded Afghanistan it did so to bring to justice those who perpetrated the 9/11 terrorist attacks on the country and to ensure that their bases would not be used again to effect a mass-casualty attack on U.S. soil. With the scattering of al Qaeda and the neutralization of Osama Bin Laden, as well as a host of other al Qaeda leaders, and the killing of several senior Taliban leaders, the United States has accomplished its original objectives. The war was won by the time that SEAL Team Six flew into neighboring Pakistan and killed Bin Laden. And crucially, most Americans never would have condoned going to war in Afghanistan had they known that we’d spend $1.4 trillion, lose thousands of American lives in the process, created a weak, kleptocratic central government in Kabul that is as despised by the Afghan people as the terrorists who keep killing them are hated, and that we’d have no end in sight to the war 18 years later.

Reports have proliferated after eight years of Obama, that the readiness for numerous American military units is at an all-time low. The United States Navy has suffered a record number of collisions involving expensive, advanced warships operating at sea. The United States Army is having equipment trouble, and the Marines have also suffered jet fighter shortages, and serious parts resupply issues. The Air Force is also stretched thin. Overburdening our forces further to keep an endless war going in Afghanistan is astrategic–especially as Russia and China move in to challenge the United States globally.

Unlike the mostly-Sunni Arab al Qaeda, the Taliban is largely Pashtun. The Pashtuns are the largest ethnic group of Afghanistan and hold a considerable amount of sway over the country’s politics. The Taliban are a quasi-Pashtun liberation movement. And, while they have been weakened over the years in conflict with the United States, they have yet to be totally defeated. And, because the United States has faced off against such a primitive enemy, as the Taliban, and seemingly (under Bush and Obama) had such a difficult time defeating them, America’s rivals around the world are beginning to question the United States’ once-unquestionable military dominance.

America’s forces have accomplished their major objectives from 2001. Afghanistan will never be a democracy as so many American “experts” envisaged. There aren’t enough U.S. taxpayer dollars in the world to accomplish such a utopian and naïve goal. The Taliban have yet to surrender despite 18 years of constant conflict with the American military. President Donald Trump believes he can get a good deal and get American forces out of Afghanistan–which would give our forces and their logistics time to recuperate from the nearly two decade-long ordeal. 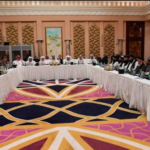 Trump is Right In Trying to End the War in Afghanistan