Donald J. Trump, the 45th President of the United States, has issued his official response to the sham second impeachment trial that is set to be held by the United States Senate in the coming days. The full statement is given on behalf of the President by his new legal team, who correctly point out that the second impeachment is historically unprecedented and wildly unconstitutional.

You can read the full statement from the 45th President below: 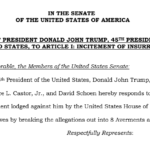