Let me ask you a personal question: Why do you believe what you believe? Why? From where did you derive your values as a human being?

In my case, there was an amazing, very strict Latin teacher at school who I think helped me internalize some of my values. Everybody has mentors, of course, or one hopes everyone may be so blessed. But for the majority of human beings who have ever lived on God’s green Earth, their values come from their parents. It’s incontrovertible. Parents are our primary role models. And for men, you always—always—try to live up to your father’s example. For me, that was very, very hard.

My parents were children under when the fascists took over Hungary during World War II. After the war, my father was persecuted, tortured, and imprisoned for life by the age of 20 by the Communist regime that replaced the fascists. My mother and father escaped to the West during the Hungarian Revolution, after my father was liberated from a political prison.

I can trace back to a single moment in time when I understood the core values I inherited from my father. I was on holiday with my parents as a child in France, my father came out of the ocean—he was a great athlete, he was on the national crew team before the secret police arrested him, and he loved to swim. As father came out of the ocean I noticed for the first time in my life the heavy white lines on his wrist, and, I knew that he was too young to be wrinkled at his wrists. So, I said, “Dad, what’s that?” And, without skipping a beat, totally unemotional, he replied: “Well son, that’s where the secret police bound my wrists together with wire behind my back so they could hang me from the ceiling of the torture chamber.” That’s when my life changed forever.

The most important speech our president has given since his inauguration as the 45th commander-in-chief was the speech that he gave in Warsaw. If you are not familiar with the Warsaw speech, read it. Watch the president’s presentation. At the time we told the Polish government, “We don’t want him downtown, in some lovely palace, giving the speech. We want him standing right next to the statue of the Warsaw Uprising. The memorialization of those brave men and women who stood up to dictatorship.” Finally, they agreed and that’s where he gave the speech.

A key part of that speech is where the president asked a question. He asks the only question that matters right now, which is: “Do we have the desire and the courage to preserve our civilization in the face of those who would subvert and destroy it” That is the question. What are the core values of that civilization?

On my national radio show, America First, I did an hour-long interview with Os Guinness that we will be airing on this Friday. I wish I had days and days to interview him, a true champion for Truth and Western Civilization. I asked him, “What is the essence of our civilization—the Judeo-Christian civilization?” And he answered, “Three things: number one, dignity, number two, freedom, number three, justice.” What do these words mean and where does their content come from?

First, dignity. We have dignity not because a government deigns to give us dignity. And we don’t have dignity simply because we’re the most intelligent animal. We have dignity because, as the Bible tells us, we are made in the image of our God. There is a reason that the founding document of this great nation has the word “Creator” with a capital-C in it. All of this garbage about the founders being deists—oh really? Read what they wrote. Listen to what they said. They were Christians and they believed that our unalienable rights came because we are made in the image of our Creator.

Second, freedom. But, what kind of freedom? I’m a Catholic and I like to quote St. John Paul, when he gave his incredible speech in Poland during the Cold War—he was one of the key actors who brought down the Iron Curtain, along with Ronald Reagan and Margaret Thatcher. The Pope said, “Freedom is not the freedom to buy Playboy. Freedom is having the choice to do what you ought to do.” That’s where the quality of freedom comes from.

Judeo-Christian civilization believes that true freedom, the true realization of Man’s worth, his value, his objective essence is when you are given freely the choice to decide by your God, and you use that power to do the right thing—which is rarely the easy thing. Ask any parent and you will have that confirmed.

And then lastly justice. This word has nothing to do with “social justice” or with SJW idiocy. This has to do with objective truth. Objective justice. Our civilization believes that truth exists outside of humankind. Truth is immutable. A man is a man, a woman is a woman, good is good, bad is bad. And we strive to create manmade justice systems that reflect that objective reality, not the capricious systems we see outside our civilization. Just look outside our civilization. I’m sorry, I’m going to say something controversial (allegedly): Some cultures are better than others. Period. If that isn’t true, just go and live in Somalia. Go and live in Venezuela and then get back to me about those cultures, those political systems.

Think of those three foundations. Think of dignity, freedom, and justice, and how they are represented in other cultures. I have worked very closely with our allies and our partners in the Middle East. I spent five-and-a-half years in the Defense Department training our friends, such as the Jordanians and the Egyptians. Go to the Middle East and do a little research on what “dignity” is there. Look at what it is to be a woman in the Middle East; what it is to be a non-Muslim in the Middle East. Talk to me about concepts of freedom and justice in societies that are run along tribal or clan lines. Or look at Asia, where the needs of the collective truly outweigh the rights of individuals.

My good friend Chris Plante has a morning radio show in Washington, D.C., and he raised a very interesting question recently: How many films have we had—rightly—on World War II and Holocaust? Hundreds. Hundreds, and “Schindler’s List” is perhaps the best. But, how many films have been made on Mao and the destruction he wrought in China? The Holocaust was a travesty. We must never forget and we must never allow it to happen again. Six million Jews killed. Yet Mao killed more than 60 million of his fellow Chinese human beings. Sixty million. Why? Because the needs of the collective outweighed the needs of the individual. Because the individual has no inherent dignity in a structure that is secular—that is, atheist—and denies the fact that we are made in our Creator’s image.

I asked you at the outset, “Why do you believe what you believe?” It was a trick question. Because if you’re a conservative like I am, if you believe this is the greatest nation on God’s Earth, then you don’t believe what you believe, you know that what you hold is true. You know that just because today Jimmy says he’s Julie, doesn’t mean he’s a girl. He is still a boy, though a confused one. Just because Alexandria Ocasio-Cortez says the Green New Deal will provide justice for everyone, doesn’t mean it won’t destroy freedom and the free market and individual liberty in this country, in ways that Stalin could never have dreamt of doing.

We are here because we know the core building block of the Judeo-Christian society is the family. It is the family that provides us the direct connection to the eternal truths upon which our civilization is built. A civilization that proudly counts both America and Hungary as its members. God, family, country. 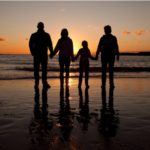 Your Family Can Save Our Civilization