Back then, it seemed to make sense. We were in a Cold War that easily could have turned hot and taken all our lives. Of course, it’s easy to forget that we had 25,000 nuclear warheads aimed at each other across the East-West divide. So if America could cultivate dissension and sow division between the two biggest Communist dictatorships, and so weaken the “Second World,” so much the better.

That was how Henry Kissinger sold President Nixon the idea of cozying up to the Chinese Communists. After 25 years of nonrecognition and isolation, an American president wasn’t simply going to reestablish perfunctory ties with Beijing, but instead, he spent a whole week in China as a part of normalizing relations with the dictatorship.

At a time when the main threat to us was the continued global spread of Communism and nuclear war with the dictatorship in Moscow, such a move had a quality of intuitive seduction.

Yet Kissinger’s idea of weakening the “Socialist International” by driving a wedge between Beijing and Moscow broke one of the cardinal rules of good strategy: it is never wise to empower one enemy simply for the sake of weakening another, more proximate one.

Nixon’s fatal acquiescence to the plan to lure China away from Moscow led to Beijing’s playing America—and the West—like a cheap fiddle in the decades that followed.

With the geopolitical door opened by a president who had earned his anti-Communist credentials after World War II on the House Un-American Activities Committee, Beijing realized a dream come true. With America on its side, the Chinese Communist Party could skillfully engineer post-Kuomintang China’s reception back into global political life and international trade.

And they were unbelievably successful.

Whether the administration was run by Republicans or Democrats, China would move inexorably closer to the position it craved: the maintenance of an ironclad dictatorship within its borders, while also having the freedom to trade with the whole world and influence international affairs as “just another country.” And we let it happen.

From Jimmy Carter’s decision to reinstate their “Most Favored Nation” trading status in 1979, to China’s accession under George W. Bush to the World Trade Organization in 2001, the murderous regime has achieved each and every goal it needed to realize in order to become a peer competitor to its greatest enemy—us. Perhaps the global pandemic that is the Chinese Wuhan coronavirus could change that. It must.

Many have asked the reasonable question: Why are we producing upward of 95 percent of our antibiotics and medical equipment needs in Communist China?

Even before one explores the question of how rife these exports are to geopolitical exploitation, forgery, and failure, this fact appears suicidal.

But let’s just stay with the question: Why are we doing business with China at all?

This is a country with a system that killed at least 45 million of its own citizens in less than five years under the guise of the “reform” movement that was Mao’s Great Leap Forward and then starved another 30 million of its citizens to death.

This is the country that massacred thousands of pro-democracy demonstrators in Tiananmen Square as the Iron Curtain was crumbling and which now censors the internet domestically for any mention of that failed revolution. And it does so with the help of supposedly American companies like Google.

This is the nation that imprisons its people simply for following the “wrong” religion or for being a member of an ethnic group it has deemed undesirable. A nation that will harvest these prisoners’ organs against their will to sell or to use for those whose survival is more “important” to the state.

And this is the country that has created a “social credit” rating system that allows the government systematically to denude you of your remaining civil rights, one by one, should your behavior or views be found to be politically incorrect or déclassé—that is, contrary to the official party line.

Yes, China is the source of the COVID-19 pandemic. Yes, it has abused and persecuted those who have spoken out about what really happened in Wuhan in December and January, and then launched an international propaganda campaign to downplay their government’s culpability. But that’s not really the problem.

My question again: Why are we doing business with the world’s biggest Communist dictatorship at all? So the plastic toys we give away with Happy Meals cost us the least possible? Or so that we can be blackmailed when we need N-95 masks for the next viral outbreak?

In 1957, when our grandparents turned on their transistor radios and heard the artificial beeps of the world’s first satellite beamed down from space they had their Sputnik moment. That’s when Americans realized the Soviets had out-thought and out-engineered us and that’s when we finally started to take the existential threat the Soviets posed seriously.

The Wuhan Coronavirus must be our Sputnik Moment for the threat China represents now. 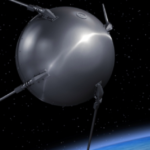 Wuhan Coronavirus Must Be Our Sputnik Moment With China