Ben Shapiro is right. Facts don’t care about your emotions.

We are living in a very strange time in America. By all objective measures, most Americans are safer and more prosperous than at any time since the Revolutionary War. And I write this fully aware of the double tragedy last weekend.

Despite the highest level of gun ownership on record, America has seen a steady decrease in gun violence in recent decades, especially in states and municipalities that respect the Second Amendment with concealed carry laws.

In terms of prosperity, the U.S. economy is the largest and most dynamic it has ever been, with record low unemployment, especially for minorities, record reinvestment by American companies, and a plethora of renegotiated trade deals which finally favor American companies and American workers.

On the world stage America has also been renewed and once again taken up its rightful place as the greatest and most powerful nation there has ever been. Starting from a place of pride in our Judeo-Christian values, the commander-in-chief, Donald Trump, has celebrated what we stand for and sent a clear message: “No better friend. No worse enemy.”

Yet the message of “Making America Great Again” is not in ascendance. Instead of being celebrated as the most successful U.S. president in a generation, Donald Trump and anyone who supports the MAGA agenda have been portrayed as lethally dangerous pariahs.

In just the last few days, our president has been accused of planning to exterminate Hispanics and honoring Adolf Hitler.  And all 63 million Trump voters have been tarred with the collective calumny of being white supremacists and racists.

Given the gargantuan gulf between the objective and empirically measurable reality of the last three years and the perceptions that together make up “conventional wisdom,” we have to ask just one thing: How is this convergence at all possible?

The answer boils down to one word that’s missing on the Right: Guts.

For the 30 years since Ronald Reagan left the White House, the Right was an increasingly self-neutering collective of people who called themselves conservatives but who were convinced—or had convinced themselves—that having a set of values was enough, and fighting for those values either was unseemly or ran the risk of being met with the disapproval of the “elite.” Careerism and personal pride caused many to fear such disapproval and the stigma of not being invited to all the best parties in D.C. and New York.

This is how the nation of Washington, Lincoln, and Reagan, ended up with Mitt Romney as Obama’s challenger for the presidency in 2012. Seriously, Mitt Romney. Just think on that for a moment. That is also how today the rump dregs of the establishment GOP have shriveled into the increasingly feeble and risible NeverTrump “movement,” a clique of unimpressive, and distinctly unmanly specimens who preach “virtue” and probity while whoring themselves for stipends from radical left-wing billionaires.

Donald Trump is a fighter. That’s why America chose him. When they voted for him, the people of Scranton and Youngstown saw a man who cared not a wit for the approval of the chattering classes, a man who wouldn’t break his promise to save America just because he wanted to fit in with the swamp dwellers in Washington. But, while he may be the most powerful man in the world, he remains just one man.

In the past three years, we have seen the vast majority of the conservative establishment do nothing for the American people and their president, or actually act against him, despite the utterly relentless onslaught from the FakeNews Industrial Complex and the Democrats.

It is pitiful and an indictment of the state of conservatism in America just how short is the list of true MAGA warriors. With Sarah Huckabee Sanders gone, we have no one outside of the president within his administration who is prepared to battle the lies daily.

On Capitol Hill, the number of fighters for the truth is miniscule. You know the names: Nunes, Jordan, Meadows, Gates, Gohmert, Graham, Zeldin, Blackburn, Cheney, and a few more. That’s out of 250 Republican senators and representatives!

In the private sector and the media, the list is just as short. At the national level, we have Sean Hannity, Tucker Carlson, Victor Davis Hanson, Mike Lindell, and a small cadre of radio hosts. After that, you quickly run out of names of people who are actually prepared to fight and stand up to the Left every day.

For the next 450 days the task is therefore clear. We need surrogates for the president and America. Those who call themselves conservatives and like what they have experienced since January 20, 2017 need to dig deep and find the courage to speak up for the Truth. Otherwise the liars and totalitarians will win. Will you show the courage Donald Trump has shown for you? 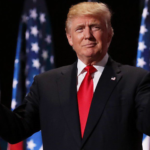