It was a mistake to disband the Office of Strategic Services (OSS) in 1945, just months after we had won World War II.

Within just two years, President Truman realized he had to have a permanent intelligence capability and so in 1947 he signed the National Security Act, which, in addition to creating the National Security Council as the highest national security policymaking body in the U.S. government, created the Central Intelligence Agency out of the ashes of the OSS.

Since 1947, the U.S. Intelligence Community has grown and grown. Originally it was given the task of collecting intelligence on our Cold War adversaries. After the September 11 attacks, it was expanded and reorganized to include today’s 17 agencies.

But whether it was just the OSS during the war, or the 17 federal agencies we have today, the mission of the American intelligence was always the same: to provide its sole client with raw intelligence and analysis so that he can make his decisions on how best to secure America and her citizens. That end-user, of course, is the incumbent president.

This week’s “Fake News” swirling around the Director of National Intelligence’s (DNI) testimony before Congress on his annual “National Worldwide Threat Assessment” isn’t simply dishonest. It is dangerous.

While Capitol Hill has the mandate to exercise its oversight function—and should use it—over the executive branch, the IC does not work for Congress. In fact, it exists solely to support the national security policies and decision-making requirements of the commander-in-chief. As such, the reports that the testimony of DNI Dan Coates, CIA Director Gina Haspel, and FBI Director Chris Wray contradicted or undermined the president are not simply wrong-footed, they are reckless in the extreme.

In America, we do not have independent intelligence agencies functioning as fiefdoms unto themselves, with their own political agendas. The idea that a federal agency designed to serve the legitimate head of state can and should openly undermine the executive may be par for the course in Latin America, Africa, or parts of Asia, but it is counter both to our Constitution and the traditions upon which America is founded and how it is secured from external attack and internal subversion.

CIA and DIA veteran Fred Fleitz, who served most recently as chief-of-staff to National Security Advisor John Bolton, put it succinctly in his response to the media frenzy: “America’s intelligence agencies were not created to publicly criticize or offer rebuttals to the president’s foreign-policy initiatives. They are not supposed to be a ‘check’ on presidential decision-making—that is Congress’s role.”

I do not believe that Coates or Haspel were, in fact, attempting to undermine the president. But I do know they did not write their own testimony and that both the Office of the Director of National Intelligence and the CIA have yet to fully recover from the Obama years.

Remember, John Brennan, an avowed Communist who voted for the Communist Party USA’s presidential candidate in 1976, before he joined the CIA, was elevated to the director of that agency by Barack Obama. Brennan used his power to press then-FBI Director James Comey to launch a politically motivated investigation of the Trump campaign based solely upon Russian-sourced opposition research paid for by Hillary Clinton’s lawyers and the Democratic National Committee. Obama’s director of national intelligence, General James Clapper, likewise left a trail of politically motivated malfeasance, not least of which was his committing perjury in front of Congress over whether or not the NSA illegally spies on American citizens.

Although Haspel and Coates are both honorable public servants who, by all evidence and appearance, share none of the vices of Brennan and Clapper, the two years of the Trump Administration have been too short a time to rid our mammoth intelligence community structure of those who believe that their alleged expertise gives them an extra-constitutional right to subvert an elected president with whom they have policy disagreements. In the meantime, President Trump remains our 45th commander-in-chief, elected by the sovereign people of the United States according to their Constitution. The intelligence community still works him, and he should remain extremely wary of it.

Sebastian Gorka, Ph.D., is former deputy assistant and strategist to President Donald Trump, host of the nationally syndicated “America First” radio show, and author of Why We Fight: Recovering America’s Will to Win. You can follow him on Twitter @SebGorka. 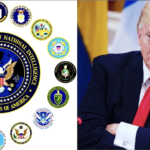 Who Do Our Intelligence Agencies Think They Work For?