It’s remarkable that the Democrats—and the corporate leftist media—don’t know the difference between Norway and Russia.

One is an unequivocal part of the West, a founding member and staunch pillar of NATO.

The other is a schizophrenic nation with imperialistic tendencies run by a former KGB colonel.

These nuances are apparently lost on the likes of George Stephanopoulos and his accomplices of the FakeNews Industrial Complex.

Since President Trump’s interview with the former Clinton White House official, hundreds of column-inches and hours of television “commentary” have already been committed to the hysterical accusation that the commander-in-chief is condoning “collusion” and that the legitimacy of the 2020 elections has already been undermined.

Norway is a friend. We talk to friends.

We even talk to enemies when we must.

But Norway is an ally, bound to us in a collective defense commitment enshrined in the Washington Treaty that founded NATO. So when Donald Trump, in response to a question, floated a hypothetical scenario that he would listen to the Norwegians if they had derogatory information about a political candidate here in America, he was showing good judgment. In fact, if any reliable international partner showed a willingness to provide information that is pertinent to the health of the country, it would be a dereliction of his duty to reject that information. That’s exactly why we have a complex and secure system for intelligence-sharing with our allies, especially those in the Five Eyes community.

Just imagine if Norway were running a double-agent in the Kremlin who could prove that Bernie Sanders was recruited as an asset by the KGB when he and his wife honeymooned in the Soviet Union in 1988 and that he had been given the mission to run for president, implement socialism in America and so weaken us in our geopolitical contest with Russia. Not only should the president be open to the receipt of such information, it would his sworn duty to do so and to act upon the information given his primary responsibility to protect our nation from all enemies “foreign and domestic.”

Yet the media has proceeded hysterically to misrepresent the president’s words, saying his willingness to be open to such information provided by an ally such as Norway is the same as being open to “opposition research” proffered by adversaries such as China or Russia. He said no such thing. He never once indicated his willingness to work with our enemies in a way that could affect a U.S. election.

This is in contrast with Hilary Clinton, who actually conspired with foreign agents and the government of Russia to do exactly that.

According to the handful of true investigative journalists and actual experts, we have only uncovered a fraction of the truth pertaining to what Dan Bongino has called “SpyGate” and Gregg Jarrett has dubbed “the Russian Hoax.” But given the massive amounts of misinformation swirling around the internet and the egregious and willful negligence by the “mainstream” media in reporting the truth about just how deeply foreign actors were allowed to penetrate and influence the last presidential election, it is crucial to catalog want we already know for sure about Hillary Clinton and the DNC’s collusion with actors inimical to our Republic and our values as Americans.

Here are the facts so far:

In sum: Hillary Clinton and the Democratic Party paid a foreign agent to collect or manufacture damaging information about the Republican candidate for president, information that was sourced from the Russian government. The subsequent propaganda file was used to surveil members of the Trump campaign, illegally, as NSA and British assets were also used to spy on those associated with Clinton’s political rival, and as human intelligence assets were deployed in an attempt to entrap Trump advisers and members of his staff.

The fall-out of the Stephanopoulos interviews is great. But not in the way George and his allies would like it to be.

With one sentence, the president has yet again turned the nation’s attention to the real scandal that should claim our focus: how the Democrats willingly colluded with a nation that remains our enemy in an attempt to win an election and defraud the will of the American people, in the biggest and most successful information operation Moscow has ever deployed against us.

Now it is up to Attorney General William Barr to uncover the rest of their crimes before our next election. 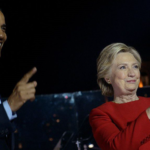 What Hillary and Obama Actually Did