Whether he will run in three years or just be the conservative kingmaker, Donald Trump will be with us and his impact on our movement cannot be undone.

Some would say it was inevitable: a non-politician decides to take on the swamp in the name of the “forgotten men and women” of America, is eventually sabotaged by the deep state, and is unceremoniously ejected from office after just one term.

Remember, Donald Trump was the first president we have ever had, from Washington to Obama, who wasn’t a member of the political or military elite. Every single president America has ever had has been a former general, senator, congressman, or governor. In 2016, American voters changed all that and so changed America, but only, seemingly, for four years. He was the first non-swamp dweller chief executive.

But will President Trump’s impact dwindle rapidly now that he has left the people’s house? Will his iconoclastic and populist rise end up as just a blip on the establishment’s radar?

After the assault on Congress, I was convinced that President Trump’s legacy and post-presidential political future were seriously in doubt. The images of red MAGA-hatted Trump supporters breaching congressional security and roaming the halls of the House and Senate would be used against the president and his legacy for years to come. This despite the fact that we now know Black Lives Matter and Antifa provocateurs like John Sullivan were in the crowd, inciting violence, and that the police were at times seemingly acquiescent to the illegal actions of the handful of actual rioters. That didn’t matter. The events of January 6 would be falsely and breathlessly labeled an “insurrection” and laid at Trump’s feet.

But then on January 13, they tried to impeach him—again—and everything changed.

This wasn’t an impeachment in any meaningful sense of that word, a word that once referred to one of the most powerful weapons any Congress could ever wield. Despite that, the Democrats turned that sacred, last-resort action into a travesty of political abuse taking just eight hours to bring charges, and crowing proudly that no evidence or even witnesses were needed. That is the definition of a show-trial.

It took more than 80 days for the impeachment of President Andrew Johnson, and over a month in Bill Clinton’s case, but by ramming through a charge of “violent insurrection” in less than a day, the Democrats changed Donald Trump’s future. (For the record: the breach of Congress on January 6 started before President Trump’s speech even ended; therefore the charge of incitement can’t fairly be made).

With the attempt to martyr a man who had in November garnered 74 million votes, more than 10 million more votes than he did in 2016, House Speaker Nancy Pelosi (D-Calif.) personally secured the unilateral rehabilitation of the man they have tried to destroy since he came down the escalators in Trump Tower.

By so blatantly perverting the power of impeachment, the Democrats haven’t won new voters but they have enraged those who voted for President Trump even more and likely pushed many apolitical Americans into a more sympathetic opinion of Donald Trump the man. The simple fact is Trump leaves office with a higher favorability rating than George W. Bush, after two impeachments, with 87 percent of Republicans in approval. That is more than adequate testimony to how badly the Democratic tactic has already backfired.

Add to that the handful of establishment House Republicans-in-name-only who voted for impeachment and are already being censured, and we have a new political map in America. It’s only the Democrats who don’t yet know it.

Don’t get me wrong, the next two years will be ugly. The Democratic Party is today a combination of doddering old machine politicians like Biden and Pelosi, vacuous careerists like Kamala Harris, and anti-American extremists like Alexandria Ocasio-Cortez and Ilhan Omar. But a razor-thin majority in the House and a 50-50 split in the Senate is hardly the mandate and guarantee of smooth-sailing that they would have you believe. And thanks to Pelosi and her double impeachment, Donald Trump isn’t going anywhere.

On the Sunday before the Biden inauguration, I decided it was time I called the president before he finally left the White House. My intent, primarily, was to thank him and his family for all they have done for America and all they have endured to make America great again. We discussed the election and impeachment and all I will say is that I was not speaking to a broken man who no longer cares to fight for those who built our republic and who have been betrayed by both establishment parties.

Whether he will run in three years or just be the conservative kingmaker, Donald Trump will be with us and his impact on our movement cannot be undone. #MAGA. 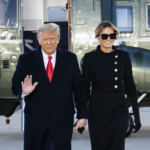