They say politics is “the art of the possible.” So are geopolitics and strategy.

And being strategic requires prioritizing different interests and national objectives, especially when it comes to national security.

That is why President Trump’s statement on Jamal Khashoggi’s murder is correct. What happened to the Saudi national at the Saudi consulate in Turkey is wrong. But our national response to his death cannot be allowed to jeopardize the precarious balance in the Middle East and endanger our regional and global interests, our safety or the security of our allies.

When the Trump administration took office Jan. 20, 2017, the geopolitical reality in the Middle East was grim. Syrians were fighting a civil war that had taken 400,000 lives. Large portions of Iraq and Syria were controlled by the Islamic State (ISIS), the most successful jihadi insurgency of the modern age. And, thanks to the Obama administration’s Joint Comprehensive Plan of Action (JCPOA) that released more than $150 billion to Iran, Tehran’s theocratic mullahs were the most powerful they had been since their revolution of 1979, spreading their influence and proxy forces into not only Iraq and Yemen but farther afield as well.

In an about-face to the “leading from behind” and “strategic patience” of the Obama years that helped create the maelstrom that was the Middle East, President Trump immediately put our enemies on notice and reasserted American leadership around the world. His two most important strategic statements were the speeches he gave in Riyadh and Warsaw. During the latter, which we ensured (with the help of the Polish government) was made at the site of the Warsaw Uprising against Nazi occupiers, the president asked: “The fundamental question of our time is whether the West has the will to survive. Do we have the confidence in our values to defend them at any cost? Do we have enough respect for our citizens to protect our borders? Do we have the desire and the courage to preserve our civilization in the face of those who would subvert and destroy it?”

With this speech, Donald Trump sent a very clear signal to the world: America is back and, under his presidency, we would unapologetically reassert the Judeo-Christian values upon which our republic was founded and stand proudly with any nation that shared them in the fight against the new totalitarian threat of global jihadism. And, in his Riyadh speech, he noted that this threat’s “deadliest toll has been exacted on the innocent people of Arab, Muslim and Middle Eastern nations,” adding: “This is a battle between good and evil.”

Exactly two weeks after he made this demand, the geopolitical response came. Saudi Arabia, the United Arab Emirates, Yemen, Egypt, the Maldives and Bahrain all separately announced that they were cutting diplomatic ties with Qatar, the worst exporter of jihadi ideology, and the Gulf Cooperation Council initiated a boycott of this key supporter of the Muslim Brotherhood, the ideological grandfather of al Qaeda and ISIS.

As key actors in the Middle East and the Muslim world tried to police their own, we in the White House worked quietly behind the scenes to redefine the diplomatic and political connections among key countries, to great success, so that even Saudi Arabia and Israel established mutually beneficial relations that had been unthinkable for decades. Our work in bringing old enemies together eventually would bear fruit publicly as Crown Prince Mohammed bin Salman, the effective ruler of the kingdom, gave an interview in which he recognized Israel’s right to exist in peace.

Now, with the death on foreign soil of a foreign national, there is a call to have the crown prince removed and for America to impose massive retaliatory measures on Saudi Arabia. This, at exactly the time when things finally have started to move in the right direction in the Middle East, with ISIS on the run, a new Sunni coalition of states including Saudi Arabia and Egypt back on our side, and Iran increasingly contained.

On one issue alone, the risk of our overreacting becomes patently obvious: energy — and not in the Howard Zinn-Michael Moore sense of “it’s all about oil” conspiracies.

Just look at a map of oil pipelines and tanker traffic in the region. Saudi Arabia and Iran basically straddle either side of the pivotal Persian Gulf, the vital waterway for oil shipments. As the Security Studies Group recently pointed out, if the Saudi kingdom were suddenly weakened, then Iran would be positioned to threaten that global lifeline. If America clamped down in such a way that critically undermined Saudi Arabia, this would “leave Iran, and their allies Russia and China, in a position to use oil as a weapon against American allies in Taiwan, Japan, the Philippines, Thailand and South Korea.”

This isn’t about oil for America. Thanks to President Trump’s energy policies, we are the world’s largest producer of crude oil. This is about our friends, our allies and partners. We have seen bad actors such as Russia use energy as a weapon to dominate its neighbors in Europe. We cannot allow the theocrats to do the same to the fragile nations of Asia.

That is why the security of billions of lives must be put on a scale with our response to one man’s murder.

America is back. And she will stand by her friends.

Sebastian Gorka, Ph.D., former deputy assistant and strategist to President Donald Trump, is Fox News’ national security strategist and author of the new book, “Why We Fight: Recovering America’s Will to Win.” Follow him on Twitter @SebGorka. 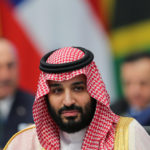 Trump is Right About Saudi Arabia: Strategic Concerns are Paramount