Fourth of July parades may be banned soon in America.

Do you remember after the “confederate statues” debate flared up again, President Trump asked a rather provocative question: “I wonder, it is George Washington next week, and is it Thomas Jefferson the week after?”

At the time, of course, the president was ridiculed for even uttering such a thing.

Well, here we are, less than 24 months after he made that prediction and Thomas Jefferson is next. And this time it’s not just a statue.

This week, just in time for our nation’s biggest national holiday, the politicians who are charged with running his hometown have decided that our third president, the man who penned one of the most important documents in human history, is now déclassé, a dead white pillar of the patriarchy who must be consigned to the “ash heap of history.”

With just one naysayer, the city council of Jefferson’s hometown, Charlottesville, have decreed that from July 1, 2019 forth the holiday celebrating his birth is to be held no more. They have decreed that they will hold “Liberation and Freedom Day” instead as a rebuke to the former slaveowner who was a champion of Enlightenment values and the father of the University of Virginia.

This is not a one-off. Nor is it just about history. It’s about the here and now. In fact, if you call yourself a patriot and love America, this is very much about you.

Deliberately in preparation for this year’s Independence Day celebrations, the New York Times posted a truly reprehensible “video essay” titled “Please Stop Telling Me America Is Great.” An admixture of out-and-out lies, distortions, and unbelievably cherry-picked statistics, the video ends with this admonition: “America may have once been the greatest, but today, America, we’re just OK.”

Just OK? Is that why fathers risk the lives of themselves and their 2-year-old daughters attempting to traverse the Rio Grande?

Just OK? The nation that saw 620,000 of it’s own citizens die in its bloodiest war ever, a war to end slavery?

Just OK? The nation whose GI’s stormed the beaches of Normandy and whose Marines took Iwo Jima in a global war that we did not start and in which we had aggressed no one?

Just OK? The nation that stared down the deadliest ideology in human history, one that cost the lives of 100 million human souls until its embodiment, the Soviet Union collapsed? That nation is “just OK?”

Name one other nation that meets just one similar criterion, let alone all of them. Just one.

Forget the rank perversion of the staff at the New York Times—to include all the editors and executive staff who had to clear such a piece of blatant anti-American propaganda—instead, just posit the simple question: if America isn’t “great,” then what is?

Are the countries of Europe, which started both the first and the second world wars, which invented the concentration camps and then perfected genocide, which today are, for the most part, committing a slow collective suicide, politically and demographically—are they great?

Is Russia great for the New York Times, the nation whose leader “colluded” with our president despite all the evidence to the contrary?

Or China, the actual dictatorship that still has labor camps today?

How about Iran, the terrorist-sponsoring theocracy facilitated to the tune of $150 billion by our last self-loathing president and which threatens us daily? Is that nation great for the New York Times?

What about Iran’s other sworn enemy, Israel? Can you imagine what the staffers who wrote and produced “Please Stop Telling Me America Is Great” would respond if asked whether Israel is “great?” Their responses would likely come straight out of the anti-Semitic talking points of Ilan Omar or Rashida Tlaib.

The attack on historic statues, the attack on the memory of our Founding Fathers, the attack on our national holiday, isn’t just politics. It isn’t simply about hating the man who will be the focal point of today’s celebrations in Washington, D.C. This is about America and it’s about you, if you love America.

I know Donald Trump. I advised him on national security when he was one of 17 GOP candidates and then served as his strategist when he became president.

My decision to do so was easy because within minutes of meeting him, I knew two things about the man: he was, and still is, not a politician, and he loves our country. And this is exactly why you were not meant to choose him.

He is not part of the “elite” political class that had run our country into the ground over the preceding decades, and he did not believe that we should live in a borderless world where the writ of the United Nations is more important than what the American people want for our country. Nor did he subscribe to the establishment belief that America’s future was simply a future of “managed decline.” Donald Trump believed that America can be made great again, and it was in fact that simple belief, tuned into the MAGA campaign slogan that would propel our first non-general, non-politician into the White House.

In the scant two-and-a-half years since his inauguration, on every field, from national security, to economics, to domestic policy, to our global standing, the 45th president has proven that not only are we a great nation but that we are again the greatest nation on the Earth. That is what the Left hates him. But they hated you first because you believed it too and you made his victory possible.

Savor that thought today, as you celebrate our Republic and as the those who loathe America stew in their own bile. 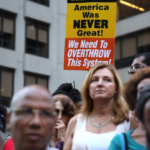 They Don’t Hate Donald Trump – They Hate You