“The Terminator” is a cool movie. Iconic even, in its gritty dystopianism. And, of course, it was the film that solidified Arnold Schwarzenegger as a superstar.

But it’s still sci-fi schlock and a B-movie at bottom. Definitely not what you’d expect to be quoted in a classified cable between Washington and Whitehall. But if you’re Sir Kim Darroch, no problem, Arnie is fit to be included in the most sensitive of communications about the most powerful nation in the world, and its leader, President Trump.

There is a hierarchy in all diplomacy. Not just in official ranks and titles, but in postings. Traditionally, most nations consider Washington and London to be the most prestigious assignments, the ambassadorship to our country’s capital or to the Court of St. James, being reserved for the most senior and trusted professional diplomat, or the biggest campaign donor who deserves to be “rewarded.”

Darroch was not a politically appointed diplomat; he was a career guy, posted to the most important position in all of British diplomacy: Washington D.C. Now he suddenly will be leaving us because of leaked cables that he wrote about the U.S. president, which included the line: “Trump may emerge from the flames, battered but intact, like Schwarzenegger in the final scenes of ‘The Terminator.’”

Such a description may be apposite for a sixth-grader’s essay on American politics, but not from the most senior diplomat from the country with which we have the closest of “special” relationships.

Darroch was right to resign. Actually, 10 Downing Street should have fired him. Why? Not for his churlish, schoolboy comparisons, but for the rest of the leaked cables.

I’ve met Kim Darroch several times. In fact, after the election in which America chose Donald Trump as our 45th president, his team at the British embassy reached out to me first of all the allied nations to establish contact with the presidential transition team, of which I was a member before I officially joined the administration. Perhaps they felt that, as I had been born and raised in the U.K., establishing positive working relations through me with the president-elect would be easiest. And I have to say, I was impressed in all our meetings with the British team that mostly focused on counterterrorism and national security cooperation, which was my primary remit.

If only Ambassador Darroch had been as professional as his subordinates.

The cables leaked to the Daily Mail are scandalous for many reasons, none of which have to do with time-traveling cyborgs. The first is the level of incompetence and laziness they demonstrate on behalf of the seniormost diplomat representing the nation that traditionally has been our closest European ally.

Kim writes of an insecure president and a chaotic and inept White House, using the most hackneyed tropes of the fake news one can imagine. What is remarkable, is how there is not one original piece of information in anything Sir Kim wrote. In fact, all of his supersensitive “classified” reporting could have been cut directly from the pages of the Huffington Post or the Daily Beast. One wonders what London’s ambassador was doing in Washington all these years, because he wasn’t using any diplomatic skills to acquire unique information especially useful for his government and the British prime minister. Her Majesty’s government could have saved itself some trouble and expense by subscribing to the Trump-hating New York Times or a CNN transcription service.

And this isn’t just a critique of laziness. This is utter and total lack of professionalism. Yes, we know that the fake news cannot but call the Trump White House “chaotic” and “inept” because that’s all they’ve done for two-and-a-half years. But so what? Did Sir Kim ever open the window? Did he ever step away from the fancy cocktail parties and white-tie receptions and actually look at what we have been doing?

By any metric, the policies of Donald J. Trump have been historically successful. The Dow just broke 27,000 this week. Twenty-seven thousand. The physical caliphate of ISIS is no more. North Korea has stopped illegal nuclear warhead testing and ballistic missile launches. NATO is finally paying its dues. We have the lowest unemployment in 50 years. How hard would it have been for any diplomat at any rank to report the truth?

On November 8, 2016, America sent a message to the world, to the Sir Kims in every capital, not just ours: the people want their sovereignty back. Kim and his ilk just can’t stand it. Why? Well, to put it in terms they can understand: Donald Trump is our John Connor. 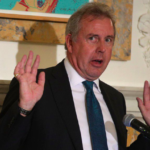