What is left to be said?

Haven’t we said it all? The names, the images, the stories of tragedy and heroism.

God willing, the stories will be told for as long as there is someone to tell them—the individual tales that so encapsulate the things upon which our civilization is founded. The police officer, the firefighter, the chaplain, the office colleague who went back just one more time, the one who ran up the stairwell after the second impact, just to make sure that another innocent life, the life of a stranger, a colleague, a friend, a loved one, was rescued. The stories of those who died, sacrificing their lives in what our Lord and Savior instructed us is the ultimate act of love; “Greater love has no one than this, that someone lay down his life for his friends.”

The West—our civilization—is unique and the greatest of all civilizations that have ever existed because it rejects the cultural selfishness of the East, where the collective decides what is of import and the individual is, ultimately, expendable. Likewise it rejects the culture of the Middle East, where all that matters is power, whose tribe or clan is the most feared, or which can destroy the most.

Ours is such a peculiar civilization in that it eschews the natural instinct to parochialism and power—jettisoning the seemingly genetically obvious “Me First!” instinct—replacing it with the exhortation “servus,” I am your servant, unto death if necessary. The mere fact that our Christian world’s greatest symbol is the Cross, a barbaric tool of torture and death, is remarkable. The persecuted are the saved. The persecuted are chosen. The persecuted, those marked for death, have already won. Forever.

For these reasons, I choose to see the heart of 9/11 this way, as the greatest affirmation since the Civil War of our Christian heritage and the Christian values built into the founding of this, the greatest nation on God’s Earth, peopled by the greatest and most self-sacrificial and grace-filled citizenry in the world. But this should be obvious to anyone who loves America and understands that the West truly is the apotheosis of human culture.

But remarkably, there is something missing in the conventional wisdom about September 11, an undeniable fact that the “elite” denied then and, incredibly, denies even more robustly today.

Man is fallen. He cannot be “perfected.” Ask anyone who actually lived under a regime which sees as its putative objective, the creation of a “better” man, be it Robespierre’s Paris Commune (a real insurrection), Lenin’s “Workers’ Paradise,” Mao’s China, or Pol Pot’s Khmer Rouge.

Man can choose—individually—to fight his innate and basest tendencies, but his natural state has been the same since the first Neanderthal prized his neighbor’s mate or coveted his hunting trophies and killed to obtain them. It matters not where or when it is, Man is always a fallen creature. Ask those herded into the concentration camps of the Balkans less than 30 years ago, or the Yazidi girls sold into sexual slavery by ISIS after Obama so precipitously withdrew our forces from Iraq just a decade ago.

And this is the most important lesson on the anniversary of the events from that sunny Tuesday morning 20 years ago. Evil is real. It lurks in the hearts of men, it walks the Earth and will until Judgment Day.

It is remarkable to think that 9/11 didn’t forever convince our “betters” of this truth. The imagery of people jumping from the Twin Towers to their deaths, the towers collapsing—the devastation jihadis brought to New York, D.C., and Pennsylvania. But it didn’t. Nor did the manual decapitation on camera of U.S. citizens, the mass murder of Egyptian Christians on the shores of an ISIS-controlled Caliphate, or even the broadcast immolation of a Jordanian pilot captured by those calling themselves warriors for Allah. Yet now we witness those self-same “experts” declare their hope for an inclusive Taliban government that will strive for “legitimacy.” This is worse than cretinism, it is a psychotic level of self-delusion.

Evil is real. It walks the Earth today and it must be met with courage and brute force until it is crushed, just as it was when we entered the White House to serve a commander-in-chief who vowed to destroy the physical caliphate of ISIS. Which we did in just five months, despite being told by Obama that it was a “generational threat” which we just had to get used to enduring. And now, just eight months after President Trump left the White House, the jihadis who protected and gave succor to 9/11 mastermind Osama bin Laden not only control Afghanistan, they have $83 billion worth of weapons Biden gave them, as well as new allies who also hate us, including the world’s greatest Communist dictatorship, China.

Thanks to delusional, feckless cowards in Washington, there will be another 9/11 and only those who understand the true lesson of 20 years ago can save us from it. 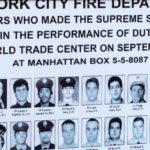 The Only Fact about 9/11 that Really Matters