When the American Conservative Union asked if I wanted to address CPAC this year, of course I said yes. Then came several weeks of discussion as to what the subject of my speech should be. This is the biggest event of its kind in the nation, with more than 200 speakers and this year in excess of 10,000 attendees, more than half under the age of 25, so I am not envious of the job Matt Schlapp and Dan Schneider have to do to pull off such a feat. (Especially when your speakers include the president and the vice president and all the security that entails).

The topic we eventually settled on was the threat Russia poses to America, a subject I am always happy to address given my family history. With parents who suffered under a Stalinist dictatorship and a father who escaped from a Communist political prison, providing a reality-check on the menace posed by a Russia still run by a KGB colonel comes easy.

However, on the day, eight minutes into my speech I decided I needed to change tack. Russia is a threat, but it is not the Soviet Union. Instead I felt compelled to talk about the real threat we face as the free-est nation on God’s Earth: the rise of socialism within our borders.

My speech was on the morning of the first day of CPAC, and the remarkable thing was, as the next three days unfolded, my decision to ad lib on that specific topic was echoed again and again—without any “central planning” from the organizers—by speaker after speaker. From Charlie Kirk of Turning Point USA, to Mr. Brexit, Nigel Farage, to Mark Levin, and finally the vice president and President Trump himself. (If you missed the president’s barnburner, do yourself a favor and watch it. And bookmark the link so you can return to it when you feel like the radical crazies are winning and you need a laugh).

All of us ended up reflecting on the fact that, like a zombie that just will not die, Karl Marx’s ideology of destruction is back, and this time not as an external threat held to by a nation that wants to destroy or enslave us, but in the guise of an erstwhile mainstream American party that has been taken over by extremists.

Yet those who have surrendered to the deadly utopianism seem to be suffering from a psychosis of some kind. Democrats by and large deny they are socialists, so much so that Speaker of the House Nancy Pelosi (D-Calif.) stood to clap during the president’s State of the Union as he pledged that America will never be a socialist nation. This at the same time that Representative Alexandria Ocasio-Cortez (D-N.Y.) announced her “New Green Deal,” a centralization of power designed to destroy the free-market completely. No gasoline engines. No air travel. All buildings demolished and then rebuilt to a politically correct code. Not to mention the rationing, or eventually phasing out of red meat so we can get a grip on bovine flatulence. (If you want to see the original green scam plan Ocasio-Cortez’s office tried to deep-six, you can find it here.)

If patriotic Americans ever capitulated and the plan were implemented it would give more power to the federal government than any Communist state ever had. Yes, there may have been breadlines in Moscow, Prague, and Warsaw, but they never banned meat or automobiles.

The fact is, the Democratic Party is in big trouble. Its old white leadership thought they could allow the fringe types into the club and control them, dilute their extremism. They are failing. This burgeoning internal civil war is clearest not when it comes to new disagreements but rather, in confronting old skeletons.

The Left has always had a default setting that was anti-Israeli and anti-Jewish. Just look at the history of the crypto-anti-Semitic BDS movement and where it was born. But in the past few weeks, with blatant anti-Semites like Ilhan Omar and Rashida Tlaib actually winning seats in Congress as Democrats, we have a blatant institutionalization of Jew-hatred at the highest levels of the Democratic Party. Pelosi said she would deal with Omar’s public statements of hate. Then she removed Omar’s name from the censure motion and then it was delayed. Next it was watered down even more by focusing on all “hatred,” not the specific and vile comments from the freshman congresswoman. Now, with Pelosi storming out of the latest meeting on the measure, it looks as if the party has a full-fledged revolt on its hands.

America’s Founders deliberately built our federal system in a way so as to keep it permanently hobbled in some respects. The checks and balances and the separation of powers were designed to effect gridlock, not obviate it, and were meant to prevent a domestic “King George scenario.” But did they ever envisage a day when one of our two parties would embrace the principles of a totalitarian policy? Note every declared frontrunner for the Democratic presidential nomination has endorsed AOC’s green socialist plan. With a worldview informed in its totality by the tenets of Judeo-Christian civilization, could they have ever imagined institutionalized hatred of half our heritage being normalized?

The Democrats are in trouble. The question remains, how much damage will they do to our Republic and our friends and allies before their own internal civil war leads to the expulsion of the extremists from our political culture? 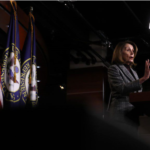