Do you remember Hillary Clinton?

Now, do you remember her campaign slogan? It was “I’m with her!”

Incredibly, I still see the peculiar blue-on-white bumper sticker with an “H” on the odd Prius or Volvo in Washington, D.C. It always reminds me of the international symbol for “Hospital.” Appropriate, no?

Now, let me ask you a harder question.

Do you remember what candidate Trump did to that slogan? How he took it, twisted it, and deployed it as a truly deadly rhetorical H-bomb against Hillary?

It was June 22, 2016, and the future president was speaking in New York City, where he said: “She thinks it’s all about her. Her campaign slogan is ‘I’m with her.’ You know what my response to that is? I’m with you, the American people!”

For those who study strategic communications, those 30 little words were a political “kill-shot.” In just four sentences, Donald Trump had perfectly encapsulated everything that was so wrong about Hillary Clinton: her arrogance, her sense of entitlement, her disregard for any other human being, and her naked and destructive ambition.

At the same time, he was able to tell Americans with utmost succinctness why they should vote for him: he had it all and didn’t need the job; he was there to fix a broken system; to serve Americans, not himself. And it was that message that took him to the White House.

Having worked for Donald Trump before January 20, 2017, and for President Trump as his White House strategist after the inauguration, I never thought I would see him out-do that ultimate exemplar of political communication. I always enjoyed seeing him leave the White House and hit the road to give stump speeches as opposed to formal, teleprompter-driven addresses, where the instinctual, non-politician I knew could be unleashed, but I never thought he could do better than that day in New York. I was wrong. And I am very happy to admit it.

Tuesday night’s State of the Union was the best speech Donald J. Trump has ever given, before or after becoming our 45th commander-in-chief. This is for two reasons. First, in terms of substance. Pick any issue that elevated Donald Trump into the White House—or any issue that has since then become centrally important, such as the abortion-to-infanticide horror—and he didn’t back down on any of them. Not the wall, not ObamaCare. Not deregulation, not infrastructure. Not lowering the outrageous cost of prescription drugs, not withdrawing from Obama’s disastrous Iran deal. None of it. There was no watering-down. No dilution to please the Republican RINO Coward Caucus, or the intransigent and increasingly radical Democratic Party. He held the line.

But more than that, President Trump took Tuesday’s speech to America and the World to send as clear a message as possible on other issues that were not part of his original MAGA agenda. He picked up the gauntlet again and again. There was no backing down, no attempt to just move past issues or to ignore issues that have taken center stage since he was elected.

Nor was anything so powerful as his statement that, as president, he is proposing the “Pain-Capable Unborn Child Protection Act,” given the shocking moves by Democrats in New York State and Virginia to legalize not only third-trimester abortion but also post-birth murder. Not only did the president not avoid the issue, he charged at it head-on, as his choice of words for the bill’s title signals, he is calling out all the Democrats who subscribe to Margaret Sanger’s culture of death. The title doesn’t skirt what we are talking about. It doesn’t talk about “embryos,” it calls the most vulnerable life in the womb what it is: a child. Bravo, Mr. President.

But it is outside the issue of direct content of the State of the Union that the president truly outdid himself. In New York, with those 30 words, he revealed the ugly truth of one greedy, dangerous and un-American woman. Last night, he did the same to the whole Democratic Party.

Donald Trump managed to trigger the whole room into singing “Happy Birthday” to one of the Jewish survivors of the Tree of Life synagogue shooting in Pittsburgh, Holocaust survivor Judah Samet, and he playfully conducted them through their celebration. Then in an incredibly moving double tribute to the victims of the Shoah and our military veterans he recognized Sergeant Herman Zeitchik who had liberated the Dachau death camp and one of its prisoners, Joshua Kaufman, the man sitting next to him in the chamber. That was a direct broadside over the hull of the DNC, which, with the evaluation of representatives like Ilhan Omar and Rashida Tlaib, has embraced institutionalized Anti-Semitism within in its ranks.

But most skillful of all, was how President Trump managed to get the Democrats—especially the “Mean Girl Caucus” dressed in white—to reveal themselves for who they truly are.

The party that has built its image as the party for the oppressed, for minorities, for the working class, sat scowling as the president regaled everyone else with the news of how his policies have brought employment, security, and prosperity to our nation, the likes of which the world has never seen, and especially to exactly those groups. Freshman diva Alexandria Ocasio-Cortez (D-N.Y.) couldn’t even bring herself to applaud the Immigration and Customs Enforcement agent President Trump recognized for rescuing more than 300 girls and women from human-traffickers. Ah, yes, the “party of women.”

But the masterstroke was the president’s decision to celebrate women—even those scowling women.  He celebrated especially the historic number of women gainfully employed, including within the halls of Congress. Suddenly at that mention, the self-declared suffragettes looked at each other, decided to stand up, high-five the air and cheer. For themselves. And they had no idea what he had just done.

This was rhetorical jujitsu the likes of which I thought I would never see again since Trump’s “I’m with you!” moment in New York. In one deft joyous flourish of heartfelt celebration for the fairer sex, Donald Trump the master orator showed the “New Wave” Democrats for who they truly are: a selfish, mean-spirited, parochial, clique that only care for themselves and not for real Americans. No number of policy papers or campaign ads could do that. Pure genius.

Oh, and just remember, Hillary could have been giving Tuesday’s State of the Union. 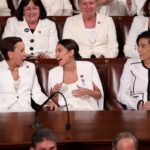 The Art of the SOTU