Before I became a proud American citizen, I always saw one of the key characteristics of the American people as an innate common sense. America is a country, for the most part, made up of pragmatists who see the world for how it truly is. This was only reaffirmed for me once I took the oath of allegiance during my naturalization ceremony, and was further reinforced for me recently by a caller to my radio show who made a fascinating observation about the Chinese Coronavirus.

Context first. I have been interested in national security for a long time. Back in the early 1990s, half as the result of a dare in college, I went on a selection weekend for the British Army Intelligence Corps reserves (what used to be called the Territorial Army). Despite being a long-haired philosophy and theology student—yes a drastic haircut was imminent—I loved the experience, passed the selection, and joined this military subculture of eccentric linguists, interrogators, photographic interpreters, and tactical intelligence professionals.

Later, after the fall of Communism, I would translate that experience into a job working in the first freely-elected Conservative government in Hungary. My father had escaped a political prison during the Revolution of 1956 and three decades later I found myself in Budapest working in the Ministry of Defense on Hungary’s accession to NATO.

Later came a stint at the RAND Corporation’s offices in Washington, D.C., years of writing for the Jane’s Information Group of military publications in the UK, and then 9/11 happened. I had studied and published on terrorism in the past but that day irrevocably changed my life’s path, and eventually would propel me to a position at the White House 15 years later.

As part of the response to al-Qaeda’s devastating attacks in New York and Washington, the Office of the Assistant Secretary of Defense for Special Operations and Low-Intensity Conflict established a program to bring senior counterterrorism operators from around the world, to network and study terrorism together and so “create a network to destroy a network.”

This is how I would end up working for legendary Marine and former CIA paramilitary operations officer, Colonel Nick Pratt, as one of his faculty members on the Program for Terrorism and Security Studies. What ensued was a series of very intense courses, which over the years would see hundreds of national security professionals come together to understand the new type of terrorism the world faced in the form of al-Qaeda, and brainstorm the most effective ways to vanquish it. And I was happy to admit to those operators that I learned as much from our “students” as they did from their professors.

Crucial to our work together was our ability to establish a baseline for our work, to be able to agree on what exactly terrorism is and how it differs from other forms of deliberate and organized violence. As a result, I came to understand what groups like al-Qaeda, and later ISIS, were doing as ‘the organized use of violence by illegitimate sub-state actors against groups unable to adequately defend themselves with the strategic intent to change a legitimate political system or force its representatives to change their policies for political, ideological, or religious objectives.” Only in this way could terrorism be meaningfully differentiated from other forms of functional violence, including freedom fighters, organized crime cartels, war crimes, or conventional warfare using uniformed militaries.

But that was then. We are living in the age of coronavirus now.

Recently, on my radio show “AMERICA First,” deep into the virus-induced national lockdown, one of our listeners called in to say that what China has perpetrated against the world is in fact terrorism.

At first, I wanted to say no, especially because that didn’t match my understanding of terrorism, one that I had arrived at over years and years of study and deliberation with some of the most effective counterterrorism professionals from around the world.

China clearly isn’t al-Qaeda or the Provisional IRA. It’s not the Hezbollah, or the Basque separatists of ETA. But could what they have done be labeled terrorism? Since that call,  increasingly I have come to believe that yes, it can.

And it should be.

We do not know if COVID-19 was man-made in the Wuhan virology lab, the only Level 4 biodefense facility in Communist China. Was it a modified version of the SARS-related coronavirus carried by bats that was being researched at the lab? We likely will never know as Beijing has destroyed much of the evidence related to the genesis of COVID-19. But based upon the best-documented evidence we do have available to date, including a groundbreaking documentary from the Epoch Times, we can state many things as fact.

After the novel Coronavirus escaped—or was released—from the Wuhan lab, the Chinese government:

All of these things actually happened and you don’t need a clearance to access the proof that they did. And whether or not the original Wuhan virus was engineered and deliberately released, or spread as the result of accidental contamination of a lab worker is irrelevant. China must be judged according to what it did after the release: by restricting domestic travel but allowing international travel from Wuhan to the rest of the world, Beijing satisfied the key elements of any reasonable definition of terrorism.

No, the Communist government is not a sub-state actor using violence to realize its self-determination, or some organization with a religiously defined apocalyptic end-state it wishes to realize through its attacks on innocents. But by allowing Chinese citizens to seed the world with a deadly virus that has taken more American lives in just four months than all the years of the Vietnam War, Xi Jinping’s government has deliberately targeted civilians for death.

America has to get back to work now. Never before has so much damage been done to our citizens and our national economy in such a short period of time. Now the question is, are we prepared to call what Beijing did by its real name and make our enemy pay the requisite price? 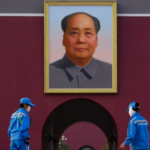