You want to lecture others about morals, principles, and “character?” Then don’t stand by those who have none.

There is a vaunted prize in American politics: the undecided, apolitical “middle.” These are the independents and late bloomers who make their voting decisions in the last few days before going to the polls.

Apparently, you people decide elections. This is for you.

I am not going to name any political party. I’m not even going to mention a specific politician or candidate. I will only ask you about your principles.

We are told that style matters. How a politician speaks in public, how he talks about other Americans, how he tweets. We have been told that this election is about “character.” So let’s talk about character, shall we?

What is the character of a man who, as vice president, frequently used the “n-word” to describe his fellow Americans who happened to be black and who, he believed, he could simply buy with a massive expansion of the welfare state he called the “Great Society?”

What is the character of a man who, not only has credible allegations of sexual assault and even rape made against him as governor and state attorney general, but when elevated to the presidency, has sex in the Oval Office with an intern 27 years his junior? And what is the character of the media and political elite that says such a transparent sexual abuse of power and degradation of the most sacred office in the world is just a “private” issue?

And finally what is the “character” of a man who implements a “high-tech lynching” of a black man simply because he was a conservative? Particularly when this high-tech lyncher is a man whose son is currently under investigation by the FBI for a money-laundering campaign involving his entire family?

Yet today you think the moral issue is presidential tweets?

What is the character of a man who says he will fight for the “forgotten men and women” of America as the first non-politician or retired general to run for the office of president and win, who then proceeds to bring us the lowest unemployment rates since 1969 and the lowest unemployment for blacks and Hispanics since record keeping began? How does that compare to wanting to buy black America’s loyalty through dependency on welfare handouts?

What is the character of a man who, after 23 years of broken promises by multiple Democratic and Republican presidents, finally keeps our promise to Israel and who recognizes Jerusalem as Israel’s capital, and moves our embassy there? How does that compare to calling black Americans the “n-word”?

What is the character of the first president ever to attend the March for Life in person and swear to the “eternal truth” that “Every child is a precious and sacred gift from God.” And that “Together, we must protect, cherish, and defend the dignity and sanctity of every human life.” How does that compare to oral sex under the Resolute Desk?

What is the character of a man who—incredibly—nominates and stands by three originalist judges who love and respect the Constitution after they are nominated to the Supreme Court and viciously attacked and falsely slandered, including one who is a mother of seven and a faithful Christian? That’s a little different from killing the secretary you were having an affair with, no?

So, it’s time for some tough love.

Get over yourselves suburban women, establishment Republicans, independents, and undecideds.

You want to lecture others about morals, principles, and “character”? Then don’t stand by those who have none. Don’t make excuses for those who preach water and drink wine. Have courage. Push back on the outrageous double standards. Stand up for those who have stood up for you. 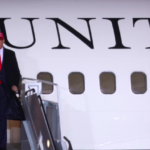