It was only a matter of time. And in this case, it didn’t take long at all.

After Representative Ilhan Omar (D-Minn.) made her racist remarks about the “evil” and “hypnotic” influence of Israel, the undue influence of the Jewish lobby in Washington, (“it’s all about the Benjamins”), and the dual loyalty of American Jews, Democrats were on track to censure her by name from the floor of the House. But it never happened. Nancy Pelosi proved too weak.

After almost a week of wrangling, the committee that drafted the final statement on the scandalous freshman representative released a final text that never mentioned her by name, her statements, or any need for her to apologize for her bigotry. (Not coincidentally, Omar sits on this very committee.) In fact, the final language was such generic and anodyne boilerplate that it could have been issued at any time, by either party, for any reason or no reason at all.

That the Speaker of the House was so timid in the face of such shocking behavior should surprise no one.

Behold the face of the Democratic Party: minority, young, and racist. This is the fruit of identity politics. Be it Omar, who is on the cover of the current issue of Newsweek, Rashida Talib (D-Mich.) who signaled the need to obliterate Israel on her first day in office, or the leader of the pack, Alexandria Ocasio Cortez (D-N.Y.), a proud supporter of the anti-Israel BDS movement, the “new faces” of the DNC constitute a united front in their hatred for our Semitic brethren.

And no matter what Pelosi says, Omar will not be reined in.

In the less than two months since the Democratic House leadership was forced to take its limp-wristed action, the immigrant saved from the hell that is “modern” Somalia has let her inner racist out once more, as this Monday she took her anti-Semitism to Twitter to attack a member of the Trump Administration.

Stephen Miller, my former colleague in the White House, is a very intelligent but quiet young man. On those rare occasions when he does veer towards being outspoken, it is almost always within his special “lane” of immigration policy. He does not talk publicly about his family background or personal beliefs, nor does he feel especially compelled to share the fact that he is Jewish, though it’s no secret. That is why Omar’s Monday attack on him is all the more egregious. To call Stephen Miller a “white nationalist” is more than simply obnoxious, given that white nationalism is an ideology which targets those of color generally, and Jews specifically.

Omar has yet to be sanctioned in any way by her party or the leadership in Congress for this newest act of hatred. This despite the fact that after her attack on Miller, a disturbing video surfaced on social media in which the congresswoman casually described the mass murder of 2,977 people by jihadists on September 11, 2001 as an event where “some people did something.” This was before she used 9/11 as the justification for the establishment of the Council on American Islamic Relations (CAIR), a Hamas-front founded in 1994. A federal court in 2008 designated CAIR as an unindicted co-conspirator in the largest terrorist-financing trial in American history. The FBI had to sever all ties with the group exactly because of its ties to the Holy Land Foundation and its leaders who were convicted in that trial for sending $12.4 million to Hamas from the United States.

In less than four months in Congress, Omar has used ancient and modern Anti-Semitic slurs to attack Jewish members of the Trump Administration, her fellow Jewish members of Congress, and our closest and best ally in the Middle East, Israel. She has trivialized the greatest terror attack on American soil since the founding of our republic, and has spoken warmly of those directly implicated by a federal court for their support of one of the deadliest perpetrators of international terrorism.

Freedom of speech is a right of all Americans. But so is our choice to denounce, call out, and recall racists. Ilhan Omar is the most flagrantly racist figure in politics today. Every day her vile beliefs and words are tolerated by Nancy Pelosi and her fellow partisans is a day that proves just how morally bankrupt and devoid of any legitimacy the Democrats have become.

Be sure to check out American Greatness for more amazing independent conservative views. 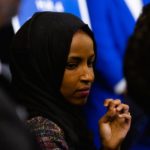 Of Ilhan Omar, Anti-Semitism, and America