Transitions of power should be smooth. The transition from the 45th president to the 46th president of the United States was one of the most dramatic in modern times. And not in a good way.

From the thousands of instances of documented voter fraud, compiled by President Trump’s legal team and Project Amistad, and led by Phill Kline, the former attorney general of Kansas, to the violence perpetrated on January 6, to the three-mile-long, 12-foot-high, razor wire-topped, and militarily fortified barricade that splits Washington, D.C. as if it were the new Berlin Wall, modern America has never seen anything like this. Including the first attempt ever to twice impeach and try a (now former) president in the Senate.

The radicalized Left tried to “kill the king” twice and failed. Badly.

Nothing demonstrates their failure more than the triumphant return of President Trump to the public stage at the Conservative Political Action Conference (CPAC), the greatest convocation of American conservatives. For a man who was deemed politically dead and buried after his supporters—and others—breached congressional security, he is very much alive and well, and back on the warpath. (The political warpath that is. Calm down, Media Matters).

Not only did President Trump look vigorous and refreshed, he hit all the important substantive points. From the insanity and injustice of Biden’s transgender edicts, to our nation’s children held hostage by the teachers’ unions, he made the collective cranium of the “mainstream” legacy FakeNews media explode with his talk of stolen elections and who should run for president in 2024: “[T]hey used COVID as a way of cheating. That’s what happened, and everybody knows it,” and “[A] Republican president will make a triumphant return to the White House. And I wonder who that will be? I wonder who that will be? Who, who, who will that be? I wonder.”

But MAGA and America First was never just about one man. It was a populist movement of “forgotten men and women” betrayed by a political establishment convinced its members are above ideas of representative and accountable governance. The real question is: how is the Make America Great Again movement doing in the face of a Left that now holds all the official levers of power?

Well, there are some very positive signs that despite not having our man in the Oval Office, MAGA is very much alive and well.

Of course, this includes the double acquittal of President Trump, but it also pertains to the arrival of new Trumpian citizen-politicians on the national stage, such as Lauren Boebert, to local victories and establishment upsets like Mark Robinson, who leveraged his anonymous viral defense of the Second Amendment at a local council meeting to become the first black lieutenant governor of North Carolina.

MAGA 2.0 also includes obvious events, such as Trump establishing his new Office of the Former President—this is not his presidential library!—and endorsing his first candidate, Sarah Huckabee Sanders.

But there are less obvious signs, too. Here we must include the GameStop and sub-Reddit revolution against Wall Street bullies and the outpouring of support for Gina Carano after she was fired by Disney for speaking the truth about the Left’s radicalism, and the negative online consequences for Disney.

The new phase of MAGA must also include developments on the Left that demonstrate the grip of the radicals and totalitarians is loosening. A year ago, it would have been impossible to believe that a move to recall Gavin Newsom from his post as governor of California would actually be a reality, or that Andrew “COVID hero” Cuomo would be crashing with his own #MeToo scandal. (Will the Emmy help now?)

And most satisfying of all, the worst of the worst, the NeverTrumpers are in big, big trouble. With one of their founders found to have been sexually inappropriate with young men and possibly underage boys, the erstwhile Republicans who had lectured Trump and Trump supporters about how morally superior they were, are either disgraced, unemployed, or both, with their site actually going dark briefly during the 45th president’s CPAC speech.

In sum: Donald Trump is back. More like him are appearing. And his enemies are not doing as well as they would wish. But it is not enough.

The Republican Swamp is still very much full of swamp creatures. It was a key moment of the CPAC speech when the president named and shamed the worst of them, from Mitt Romney to Liz Cheney. The question is, can we find and support enough MAGA candidates to make the fake conservatives irrelevant? That will only happen if there is an organization that does exactly that and not just another PAC to collect donations and pay campaign “experts.” We need a “MAGA Machine,” just like the Left has a machine of its own. And we need ours now. 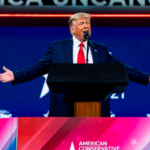