Americans are normalizing violence in their politics, but not in the way the media and the “experts” would have you believe.

No, “white supremacists” are not the greatest threat to your safety, despite what Don Lemon and his cohorts in the Fake News Industrial Complex say. In fact, of 250 shootings in America wherein four or more people were shot (which is the official definition of a “mass” shooting), not one of the perpetrators was a conservative, let alone a “white nationalist.” But that hasn’t stopped the Democrats.

It has been more than two months since the gay Asian journalist Andy Ngo was brutally attacked by Antifa a block from the police headquarters in Portland, Oregon. In the nine weeks since, not one of his left-wing attackers has been charged, despite the multiple witnesses and clear video footage. It seems that if you call yourself an anti-fascist, you can act with impunity and use violence for optical ends in cities controlled by the Democratic Party.

But this isn’t about one-off events. This is not about at-risk journalists. If you believe in our Constitution, this is about you.

Democrats last week officially proclaimed that 5 million Americans are domestic terrorists and demanded in an official resolution that the federal government handle them accordingly, as a threat to the nation’s national security. If you are a member of the NRA, that includes you.

On Tuesday, in a unanimous vote, the San Francisco Board of Supervisors passed a resolution labeling the NRA and all those who support the Second Amendment not-for-profit terrorists. And, of course, there are no Republicans on the board.

While the NRA has never condoned terrorism, and not one of its members has ever committed a terrorist attack, the Democrats by the Bay are comfortable with dehumanizing millions of Americans and using political language that, in effect, draws a target on the backs of innocent Americans by designating them all “domestic terrorists.”

Since 63 million Americans elected political outsider Donald J. Trump President, the leftists in Antifa have made “Punch a Fascist” their battle cry. If, like the Democrats, you believe unprepossessing gay Vietnamese journalists need to be punched, what would you do if you believed there are millions of actual terrorists living in America?

Remember, James Hodgkinson, the Bernie Sanders campaign volunteer who decided that campaigning wasn’t enough. So he took a rifle and a handgun to a baseball diamond in Virginia with a kill-list of leading Republican congressmen, and almost killed one of them, Steve Scalise, before he was killed by two brave Capitol police officers. How many James Hodgkinsons are there still out there who have now been given a target-set of millions of their fellow Americans thanks to official decisions by leaders in the Democratic Party.

Before I joined the Trump White House, I spent two decades studying and then teaching irregular warfare and counterterrorism to our military and federal law enforcement agents. In the various case studies we used, we saw a pattern. In the developed Western world, under the Westphalian model of the national state wherein the government maintains a monopoly on the legitimate use of force, those groups who wished to destabilize the status quo and subvert the political system came up with a Janus-like strategy, a political pincer movement to get their diabolical way.

Realizing their terrorist group was small and could never defeat the government in a head-to-head fight, groups like the UK’s Provisional IRA, or ETA (the Basque separatists of Spain) would work hand-in-glove with “legitimate” political parties that could exploit the inherent weakness of non-authoritarian democratic systems from the inside, while pretending to denounce the bombings and assassinations of their terrorist comrades. For the IRA, that political front was Sinn Fein; for ETA, it was Herri Batasuna.

This was a cunning and devious model, which could be very effective. The IRA eventually succeeded in getting a seat at the negotiating table to parley with the British government—a fateful decision that eventually led to the Good Friday Agreement of 1999, which for all intents and purposes was state capitulation. Now the Democrats have found their armed wing, and are using their official proclamations to encourage further violence.

We should not be surprised at this turn of events; remember, it has happened before. America’s worst domestic terrorist organization, the Ku Klux Klan, was founded after the Civil War by Democrats, and acted as the party’s armed wing for nigh on a century.

Forget the lies and propaganda of today’s DNC, the KKK always was a creature of the Democratic Party, achieving what the Democrats couldn’t in state capitols and in the federal government through the murder and intimidation of lynchings and cross burnings.

The undemocratic, totalitarian tendencies of the Left run deep and run strong, and today they even have minority voices like Ayanna Pressley (D-Mass.) spout the most viciously racist statements. Ask yourself, why would leading Democratic Party voices such as Alexandria Ocasio-Cortez (D-N.Y.) lobby openly for the dissolution of those armed organizations that protect our borders and keep us safe, at the same time that other Democrats who are running for president openly call for the government to disarm American citizens?

The Left already has it’s violent armed wing. It’s no longer the Klan with their white hoods. It’s Antifa and their black masks. And if the Democrats win in 2020, they will move forward with disarming those who disagree with them politically, starting with 5 million Americans who believe in the Second Amendment and who are, therefore, “terrorists.”

When you think about how important the next election is, think about it in those terms. As Donald Trump, Jr. said on the night of the launch of his father’s re-election campaign, you have a straightforward choice in 2020. Socialism or liberty. It’s that simple.

This article originally appeared in American Greatness on September 8th. For more fantastic conservative commentary, check out American Greatness today.
AMERICA First is the newest nationally-syndicated radio show in the United States, part of the Salem Radio Network. The host, Sebastian Gorka PhD., served most recently as Deputy Assistant for Strategy to the President of the United States, Donald J. Trump, and is author of the New York Times bestselling book “Defeating Jihad.” His latest book is “Why We Fight: Defeating America’s Enemies – With No Apologies.” You can follow him on Twitter @SebGorka, on Facebook, and on Instagram @sebastian_gorka. AMERICA First is available on the iTunes podcast app, streams live at www.sebgorka.com, and is on YouTube. You can contact him here. 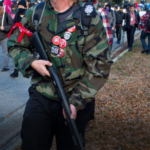