It’s not a Russian disinformation operation; it’s not a political dirty trick based on lies. Hunter Biden’s laptop is real. As are the emails and pictures on it. Here are the facts.

Additionally, America’s Mayor, Rudy Giuliani, has handed over his copies of the Biden hard drive to local police authorities in Delaware, where the laptop was abandoned, because it contained images that suggesting inappropriate sexual relations with an underage girl. This after Hunter Biden was linked directly to prostitution and indirectly to a human-trafficking ring in the official Senate report released before the laptop’s existence was revealed.

And then there is the Bobulinski press conference.

Shortly before the second and final presidential debate, former Naval officer Tony Bobulinski held a remarkable press conference in which he disclosed that in 2015, when Joe Biden was still the vice president of the United States, Hunter Biden approached him to become the CEO of a new company called Sino Hawk. This company would become the vehicle through which millions of dollars would be funneled from Chinese state interests to the Bidens, monies earmarked for Joe Biden, along with the other members of his family.

When the extent of the pay to play scheme grew too large and Hunter Biden overrode Bobulinski’s demands not to treat the firm simply as his family’s “piggybank,” the former Navy lieutenant decided to begin collecting evidence of the Bidens’ crimes. At the end of the press conference, he held up the three cellphones in his possession that hold all the relevant emails and text messages documenting the massive web of corruption, phones that Bobulinksi was to hand over to the Senate on Friday morning.

Since then the FBI has stepped in and requested a meeting with the whistleblower to interview him about the revelations. What happens now is impossible to predict, given that the original Hunter Biden laptops were subpoenaed by the Bureau in December and deep-sixed into a government memory-hole until the New York Post and Giuliani told the world of their existence, 11 months after law enforcement had taken them into possession.

Naturally, for those who have followed these events, there has been an understandable focus on two themes: the sexual and the financial. Hunter Biden is a troubled man. Thrown out of the military for his drug use, he has slept with his dead brother’s widow and sired a child with a stripper from an establishment of ill repute he frequented regularly while indulging in his enduring drug habits. Then came the evidence of his endangerment of an underage girl.

More salacious details likely will follow and if Hunter is guilty of being a pedophile, he should pay the full consequences for that. But the larger scandal, of course, is the one related to his business activities and the involvement of his father. From his employment by Burisma, one of the most corrupt energy companies in Eastern Europe, to the $3.5 million he received from the billionaire wife of the disgraced former mayor of Moscow, and on to the $1.4 billion deal he closed with the National Bank of Communist China when his father was vice president, and on, and on. This is a concatenation of scandals that would bring down a government, let alone a presidential campaign.

But it’s not the prostitutes, the drugs, the money, or the bribery that are the real issues here. The crisis comes from the greatest source of the monies involved. Hunter Biden and the Bidens received millions from the Ukraine, millions from Russia, and millions even from Iraq. But they received more than $1 billion from our greatest enemy, Communist China.

China isn’t just another country. It isn’t our ally, our friend, or even our “competitor.” It is a nation that has vowed to replace America as the most powerful nation in the world. It has declared its plan to do so under its “Belt and Road Initiative,” and it has even revealed the unconventional forms of attack and subversion it is using to do so under the banner of “Unrestricted Warfare.”

Now, the government of our most strategically significant adversary is on the cusp of potentially seeing a man who they have essentially “bought” take the White House, a man whose family has been enriched with blood money generated by a regime that still maintains labor camps and where the one-party system crushes or “disappears” anyone who dissents.

As such, the presidential candidacy of Joseph Robinette Biden represents the gravest of national security threats to the United States of America. November 3 is not just an election, it is our last chance as Americans to prevent our gravest enemy from achieving its greatest victory. 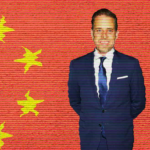 It’s Not About the Money or the Prostitutes