We have no excuse for not finally waking up to the threat that China poses.

We are products of our environment and our genes. The tension between nature and nurture is a false one. Our childhoods, our upbringings, and the times we live in all have an indelible effect on who we are and how we see the world, as does our lineage. Drop a caveman on the New York Metro and find out. Likewise, take a latte-sipping millennial and drop her in the Amazonian rainforest and see how she fares.

For me, my formative environment was the Cold War. Born in 1970, I became aware of the world around just me as the West entered the frightening phase of Mutually Assured Destruction, as Ronald Reagan warned us of the existential threat that was the “Evil Empire,” and as the Soviet Union invaded Afghanistan with its tanks, helicopter gunships and anti-personnel mines that looked like children’s toys.

As the child of parents who had escaped Communist Hungary during the Revolution of 1956—my father had been liberated by the freedom fighters from a political prison—my perspective on the world will forever be informed by the threat of Karl Marx’s deadly ideology. But the threat of socialism, or its ultimate expression, communism, no longer emanates from Eastern Europe. Nor is it solely an external threat best measured in the “correlation of forces” represented by the respective military might of NATO and the Warsaw Pact arrayed on either side of an Iron Curtain. No, my time working in the Trump White House, and now as a presidential appointee to the Defense Department, has proven to me that that threat is now both internal and external and generated from the world’s largest remaining Communist nation: China.

And now, perhaps, America will come to realize it, too.

This realization came to me once I acquired my necessary security clearances and read the intelligence materials prepared for new political appointees. But this realization can come to anyone, with or without a security clearance, and it is a story that long predates the arrival of Donald Trump as our 45th president. All you need is access to publicly available news reports and a better than average memory for stories the “elite” and their media satraps would prefer you forgot.

First there was Ng Lap Seng, a man who loved the Democrats and the Clintons so much so that he smuggled $4.5 million in cash into the United States, money that was illegally funneled through an Arkansas restaurant owner by the name of Charlie Trie, into the coffers of Democratic National Committee during Bill Clinton’s tenure in the White House.

Then there was the outlandish and incredible tale of Senator Dianne Feinstein’s chauffeur. For almost 20 years, this individual ferried the Senate Intelligence Committee member to and from her official duties as he was in the employ of Communist Chinese Intelligence, a fact that America only learned about because of a passing mention in a piece in Politico. And if you’re wondering what the consequences were for the Chinese spy and Feinstein, there were none.

But it’s not just Democratic presidents or Democratic senators who enjoy the patronage and attention of our greatest geopolitical rival; it’s also less impressive, more intellectually challenged members of lesser bodies, such as the House Intelligence Committee. And it demonstrates Beijing’s attention to detail and deliberate forethought that when Chinese honeytrap Fang Fang romantically targeted Eric Swalwell, he was a no-name small-time local in California. Communist China has a plan and it definitely thinks long term.

As if that were not enough, now we have the latest report (of course, not from a U.S. media entity but from an Australian outlet) of the leaked membership files of more than 1.5 million members of the Communist Party of China, including thousands of loyal Communists employed by Western companies such as Boeing and Pfizer, one of the manufacturers of the new COVID vaccines.

Kissinger and Nixon were wrong. China cannot be made “friendly,” just another “normal country,” simply because we trade with them. We took that step 49 years ago and Beijing still runs slave labor camps and has a more sophisticated plan to strategically sabotage America than anything Mao ever dreamed of. We have no excuse for not finally waking up to the threat China represents. Especially given the fact that very soon the Chinese may have a man in the Oval Office whose son is indebted to them in more ways than one. 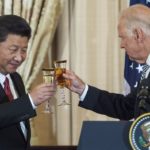 It Was Always China