September 24, 2019, will be remembered as an historic day. But not for the reasons House Speaker Nancy Pelosi (D-Calif.) believes. It may just be the day when the Democratic Party guaranteed the reelection of President Donald Trump and a second term for the Make America Great Again agenda.

Before we go on, let’s just be clear about one thing. Pelosi’s big announcement was a head fake. In terms of impeaching the president of the United States, nothing actually happened Tuesday.

Despite everything you may have heard to the contrary, impeachment isn’t simply a “political” process. According to our Constitution, it is a quasi-judicial process, not some reflection of the transitory whims of a particular political coterie. It has standards. It must follow a constitutional order.

As such, it involves the incumbent president being charged with a specific crime. It involves a prosecutorial-like functioning of the House of Representatives involving investigation, production of evidence, and votes by its members, before an actual conviction by a supermajority of the Senate is even an option.

The minimum requirements simply cannot be met by either chamber right now, despite the Democrats’ majority in the House. And Pelosi knows it. Right now, there are dozens of congressional Democrats sitting in districts where Donald Trump won in 2016. If they hope to be re-elected, they will never vote to impeach President Trump, so that the conviction can even be considered by the upper chamber.

And for the record, since the founding of our Republic, no senator has ever voted to convict a president from his or her party. Ever.

Pelosi’s announcement that her Democrat-led House committees would hold hearings into impeaching the president is the definition of fake news. Just last week, Representative Jerry Nadler (D-N.Y.) held an “impeachment” hearing at which Corey Lewandowski, the president’s former campaign manager, utterly lampooned Nadler and his accomplices. This was before Nancy’s “bombshell” announcement.

Nothing. This is all an unbelievably cynical shell game. Pelosi hopes to placate the radicals in her party—including Rep. Alexandria Ocasio-Cortez (D-N.Y.) and her “squad”— and prop up the DNC’s anemic 2020 war chest.

The utter circus-like nature of Pelosi’s non-decision is only amplified by the absence of the most important requirement for any impeachment: a crime. The whistleblower allegation⁠—which isn’t a real whistleblower allegation, given that the president’s accuser proffered the inspector general hearsay, and not evidence—is that the president asked the Ukrainian president to fight corruption if we as a nation were to continue providing massive amounts of aid to that corruption-riddled country.

There is no element of the U.S. criminal code that includes a crime of “standard conditional demands on U.S. aid.” But extortion for the purposes of personal gain is a crime. And a serving vice president withholding U.S. funds until Ukraine fires the prosecutor who is actually investigating his own son—now that is a crime.

What will be the actual consequences of Pelosi’s non-decision? With more sham committee hearings into an innocent man, there will be two major ramifications. As the farrago of circus-masters Nadler and Schiff pushes out all meaningful activity on Capitol Hill, Biden’s campaign will collapse sooner rather than later, as his family’s real corruption cannot be ignored.

Similarly, as the Democrats focus more and more on non-crimes, it will be easier and easier to remind all Americans of the real crimes Pelosi ignored.

From Benghazi to Server-gate. From Uranium One to Fast and Furious. From FISA-gate to the unmasking scandal. When a majority of politically active Americans realize that not once did the Democrat Speaker ever call for a real investigation into real crimes, yet now she wants to waste our nation’s money and time on a man whose only crime was not being Hillary Clinton, then Pelosi may finally realize the mistake she made this week.

By then it will be too late for her and her party. 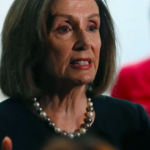