Whatever happens in the years to come, American politics can never return to what they were before November 8, 2016.

Why, you ask? Because a brash TV celebrity businessman from Queens broke the media, broke Washington D.C., and broke the self-appointed “elite” on both coasts. The stake he drove through their hearts will endure no matter who resides at 1600 Pennsylvania Avenue.

First, they laughed at Donald Trump the candidate. At his appearance, at his demeanor, at his outré stump speeches. Then, when he wiped the floor with the 16 establishment Republican candidates they panicked.

The criminal cartel that is the Clinton machine hired a former British intelligence officer—who hated Donald Trump the man—to generate a “dossier” of outlandish and false opposition research that was used by Barack Obama’s thoroughly corrupt Justice Department and FBI to gain under bogus pretenses a Foreign Intelligence Surveillance warrant to spy on her opponent’s campaign. But they failed.

That is when the coup plot was hatched.

I do not use that word lightly. However given that both the liberal judicial authority Alan Dershowitz, and the most preeminent conservative historian and strategist, Victor Davis Hanson, have recently used the word “coup” to describe the machinations of Deputy Attorney General Rod Rosenstein and former Deputy FBI Director Andrew McCabe, the choice is deliberate and justified.

Rosenstein and McCabe had never been elected to any public office, let alone the cabinet of the United States. Yet by McCabe’s own admission, they plotted to use the 25th Amendment to our Constitution to remove the duly elected president—an amendment that was designed for the incumbent president’s cabinet to employ in the dire scenario that their superior was incapacitated and unable to perform his duties as commander-in-chief.

The amendment is very clear. The president’s removal is decided by the vice president and a majority of his cabinet. Not by an FBI flunky whose wife received $700,000 from Hillary Clinton’s bagman Terry McAuliffe to run as a Democrat for the Virginia State Senate. And not by the acting attorney general—a man who would name his friend Robert Mueller as special counsel to investigate the president the very day after Mueller failed in his interview with President Trump to get his old job back as Director of the FBI. This is exactly what a coup d’etat looks like—albeit, thankfully, a failed coup d’etat.

The point here is that Rosenstein, McCabe, Peter Strzok, Lisa Page, and the rest of the corrupt bureaucrats failed and Donald Trump remains president. Not only that, but beyond all rational expectations of standard political calculation and despite the overwhelming bias of the media—coverage of Trump is estimated at 90 percent negative in just the last year— his popularity stands by at least one measure at a remarkable 52 percent, which is significantly higher than for Obama at the same time in his first term.

This is the dispositive proof that Donald J. Trump has changed America in ways that no “expert” ever could imagine.

They spied on him and tried to subvert his campaign for election to the highest office. Once installed in the White House, they plotted to remove him. And all the while the media and the establishment as a whole either was not on his side or actively working against him. Yet he is winning more than ever.

Just look at Friday’s deal and his proclamation on a national emergency on our Southern border for proof.

Speaker of the House Nancy Pelosi (D-Calif.) went on record saying she’d only give the president $1 for the wall. Then, after a government shutdown and three weeks of negotiations, the president was finally offered $1.375 billion by the Democrats. In the meantime his acting chief of staff, Mick Mulvaney found $6.6 billion, including drug cartel asset forfeitures, sitting at Department of Justice. So after requesting $5.7 billion to build the wall, and being refused and ridiculed, President Trump apparently walks away with $8 billion to keep his MAGA promise to America. Nancy promised $1, America ended up with $8 billion.

When I grew up in the United Kingdom, there was a famous story that became a popular song and then a movie. It concerned Charles Wells, “The Man who Broke the Bank in Monte Carlo.” Wells walked into the famous casino on July 28, 1891, with 4,000 British Pounds and walked away with the equivalent of 4 million.

For more than 30 years, America has been held hostage by a political, economic, media and cultural elite which has been wrong on every major issue you can imagine. From foreign adventurism to trade policies; national sovereignty versus globalization; love of country to hatred of the principles upon which our nation was built—one man has broken the stranglehold of a morally bankrupt “elite” and he isn’t even a politician. 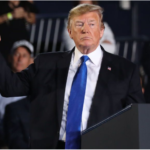 How President Trump Broke the Left