The only questions left now are: which side will mobilize more of their voters, and when in fact will we even have a real, official, and certified winner?

There are “October surprises” and then there are October bombshells.

Social media on Friday morning was afire with multiple versions of a report from one of the soberest journalists in America today, a man who was spied upon—along with his elderly parents—during the Obama years. That reporter is Jim Rosen of Sinclair Broadcasting.

I know Jim, he has appeared more than once on my national radio show. He is a consummate professional, who in addition to his sterling journalistic work, has written several successful historical works on American politics. Days ahead of this unprecedented election, Rosen confirmed with the Department of Justice that last year a money-laundering investigation was opened on Hunter Biden, Joe Biden’s son, and his business associates and that that criminal investigation is still underway.

This shocking revelation comes on the heels of a deluge of information provided by Hunter’s business partner, former Navy officer Tony Bobulinski, including verified emails and voice-recordings of Biden and others detailing their business dealings with state actors in Communist China, among them a top intelligence official.

These reports landed after weeks and weeks of polling data that President Donald Trump was trailing in key constituencies and crucial battleground states. Are the polls to be believed? Is the active criminal investigation also looking into Democratic Party candidate Joe Biden? We don’t know. Other observations may indicate a likely upset for the putative poll leader Biden this Election Day.

Four years ago pollsters and other “experts” were completely wrong. The then-Democratic nominee, Hillary Clinton, was universally embraced by the establishment as the next chief executive, with even the New York Times brash in its certitude that she had a 91 percent chance of winning. And there is no evidence that any of the major polling enterprises or media corporations have significantly changed their methodology for measuring political affiliation among likely voters.

Even if they had and they had eradicated most of the legacy methods which had served them so badly four years ago, it likely would make no difference. Think of the Cato Institute poll that showed that more than 60 percent of Americans are unwilling to speak openly about their political beliefs in an age of “cancel culture.”

When admitting to being a Trump supporter can have very negative consequences for you professionally and socially, why would you say who you are going to vote for when an anonymous pollster calls or texts you? Polling may in fact be impossible in an age of Antifa and politically-motived doxxing.

There are other metrics, however. One of the most obvious is the president’s rallies. Despite contracting COVID-19 and being hospitalized a month ago, President Trump swiftly returned to the campaign trail, hitting multiple sites and states on the same day, some with tens of thousands of supporters in attendance. Biden, on the other hand, has mostly stayed at home—in one instance for a full five days before his last debate!—and when he or Harris has appeared in public it has been to minuscule audiences.

Of course, it is easy to blame the Chinese coronavirus for this disparity, with Democrat voters unwilling to brave large crowds. But even then, there is the very interesting factor of rally data.

The RNC has been unusually candid in releasing the registration data from the president’s events. And it’s stunning. On average, those attending a rally have included between 20-35 percent who were formally Democrats, independents, or haven’t ever voted before in an election. If they all vote for President Trump we could see a landslide victory today.

The only questions left now are: which side will mobilize more of their voters, and when in fact will we even have a real, official, and certified winner? So go vote and make sure you take three friends with you to vote as well! 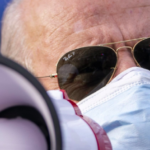