You have to give it to Democrats; they are organized.

As soon as Attorney General Bill Barr refused to commit a crime by releasing a fully unredacted version of Special Counsel Robert Mueller’s report, the Democrats’ talking-point team was drafting the mandatory soundbites.

In a flurry of interviews over the past few weeks, everyone has been on message: If they work for, or are related to President Donald Trump, just jail them.

Whether it’s the ongoing calls for the attorney general to be imprisoned or Da Nang Dick Blumenthal (D-Conn.)—the only senator in office who lied about serving in Vietnam—calling for the imprisonment of the president’s son or whether Speaker of the House Nancy Pelosi (D-Calif.) saying she doesn’t have enough prison cells to lock up all the “criminals” in the Trump administration, the refrain has been remarkably consonant.

As a legal immigrant to this the greatest nation on God’s Earth, I find this shocking. It’s all the more shocking given what my family suffered during the 20th century, with my parents surviving as children under a fascist occupation and then persecuted under a Communist regime before escaping to the West and to freedom. The recent actions and statements of the Democrats are so surreal, so over-the-top, that it feels like we’ve crossed into new and very dangerous territory.

But then I read the latest issue of the superb Hillsdale publication Imprimis and I realized I was so very, very wrong. I had lost all historic perspective. This is the Left. This is who they have been for a very long time.

In his essay, “Politics by Other Means: The Use and Abuse of Scandal,” John Marini of the University of Nevada, takes us back to Watergate and juxtaposes the conventional wisdom about who Richard Nixon was and the significance of Watergate with what actually happened and why the then President had to be neutralized. He writes:

“The popular understanding of the Watergate scandal—that it was somehow rooted in Nixon’s flawed personal character, and that it was essentially a legal matter—remains unshaken after more than 40 years. But I was not convinced then, nor am I convinced today, that Watergate can be properly understood in either personal or legal terms. By promising to use his executive power to bring the executive bureaucracy under his control, Nixon posed a danger to the political establishment after his landslide re-election. In response, the establishment struck back.”

And how did they do that exactly? If you ask anyone of the right age, or even a Millennial who has received the requisite indoctrination (or happened to see the film version of “All the President’s Men”), the same answer is the same: The Washington Post’s Bob Woodward and Carl Bernstein risked their all for the truth in a fight with the “criminal” in the White House.

But that’s not really what happened. That’s a narrative that has been drummed into the public psyche thanks to the Noam Chomsky-Howard Zinn-Oliver Stone-Michael Moore machine intent on falsifying our history for political ends.

The real story is that an incredibly vain self-appointed “elite” who fancied himself a Guardian of the Good and who became notorious as “Deep Throat,” spoon-fed information to the Post duo for over a year. (Remind you of anyone called Jim you know? Possibly a very tall former FBI director?) Woodward and Bernstein didn’t investigate anything. The deep state was in control the whole time. Who was the puppet master? None other than FBI Associate Director Mark Felt.

As Marini writes, the media merely “served as a conduit by which the bureaucracy undermined the authority of the elected chief executive.” He adds, fascinatingly, that “Geoff Shepard, a young member of Nixon’s defense team who has continued investigating Watergate using the Freedom of Information Act, has recently established as well that the prosecutors and judges involved in Watergate violated the procedural requirements that ensure impartiality, acting instead as partisans opposed to Nixon.” Can you say FISA Court? Can you say “Operation Crossfire Hurricane”?

What was the catalyst for this series of seditious leaks that led to a president’s downfall? Marini has done his homework and provides us an answer from the Congressional Quarterly of the period:

“When the 93rd [Congress] first convened in January 1973, President Nixon’s sweeping assertions of executive authority posed a threat to the viability of the legislative branch. Even as Congress braced for confrontations with Nixon over spending, war powers, and other issues, its defiance was tempered by doubts as to whether it was indeed any match for the newly re-elected President. But by the time Congress adjourned [on] December 20, 1974, the balance of power had shifted dramatically. Both Nixon and . . . [Vice President] Agnew had been driven from office in disgrace—replaced by men whom Congress had a hand in selecting.”

The opening sentences may as well be a description of Congress today and the cries to impeach President Trump must be put into this broader, more strategic context.

This is not a case of the Democrats lacking imagination and not having a platform for the 2020 election and simply defaulting to “Impeach, Impeach, Impeach!” This isn’t just a delayed act of revenge for the impeachment of President Bill Clinton, a settling of scores with the GOP. The Democrats couldn’t care less about the Clintons today. Just look at the fate of the Clinton Foundation or the pathetic spectacle that is the Clintons’ speaking tour fiasco.

This is about one thing and one thing alone. It’s yet another case of the deep state deciding that the will of the American people must be overridden and an election nullified with the help of their domesticated lackeys in the media.

Richard Nixon was never supposed to be president. And the billionaire from Queens most certainly wasn’t. Donald Trump is a threat to the Comeys, the Brennans, the Nadlers, the Schiffs, the Pelosis, and the Mark Felts of the world. Just who do the American people think they are to threaten the power and control of people who have made up the modern professional political class since the 1960s?

These are the stakes involved and this is why 2020 will be even more important than 2016. The Republic hangs by a thread. Remember that when next you hear the Speaker of the House laugh like a despot about jailing those who support the president. 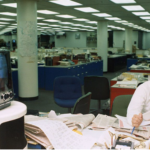