Our nation is unique.

Most every other nation was established in a capricious fashion. Whether defined by an ethnicity, a linguistic community, or the happenstance of being ruled by a royal dynastic elite, other countries were not the result of their people appealing to first principles, of building a political structure from scratch based upon the lessons of prior centuries. Ours is different.

Yes, our Republic was born out of war, as has been the case with so many others over the centuries. But our Revolutionary War wasn’t simply waged over a brute demand for self-determination. The catalyst for the fight that would result in our being an independent nation-state was the grievous transgressions of a monarch who our Founding Fathers saw as acting in direct contravention to objective and universal truths.

After our unlikely victory against what was then the most powerful empire the world had ever seen, our forefathers enshrined those truths into our founding documents. And the Declaration of Independence and our Constitution have served not only to codify those principles as the foundation of our political system for at least 11 generations, they have become a beacon for hundreds of millions of non-Americans around the world who also believe in “government of the people, by the people, and for the people.” When dissidents escape house arrest or brave shark-infested waters in search of freedom, their destination is rarely the French embassy or the shores of Africa.

When discussing rights—particularly those rights enumerated in our Constitution—we often weigh priorities. Freedom of speech purists, for example, insist that without the First Amendment, all other rights are nugatory, while Second Amendment advocates stand unwavering in their conviction that without the right of the population to protect itself from a tyrannical government, everything else is hypothetical.

Yet it should be obvious where our existence as free men and women starts. Not with the right of association, or a free press, or freedom of conscience, or the right to keep and bear arms. Everything begins with the right to life.

The Democratic Party has quite literally become the political party of death. Their promotion of abortion for any reason—or no reason at all—has now gone beyond the Orwellian demand for “reproductive rights” (how killing a baby in the womb can be twisted into a “right” of reproduction is perverse on its face), to prominent Democrats becoming champions of not only this trimester abortion but also “fourth trimester” infanticide.

New York Governor Andrew Cuomo earlier this year signed a bill to allow abortion up until the baby’s due date, and  Governor Ralph Northam of Virginia—the “Butcher of Richmond”—openly advocated a mother’s right to kill her child after a botched abortion leaves the child alive and outside the womb. This is today’s Democratic Party.

Remember, not so long ago, the Democratic Party was the party of working-class Catholics, Italian immigrants, Irish manual laborers who would find the mere idea of politically sanctioned infanticide rightly abhorrent. Today there is no place for pro-life views inside that party. In fact, their attitude to the foremost cause of deliberate, non-accidental, death in America today, isn’t simply approval, it is a diabolical celebration.

Cuomo’s bill was deliberately passed by the New York Senate on the anniversary of Roe v. Wade, and as it became law the Assembly, with its Democrat supermajority, cheered in unison as if it were VE Day. Then, in the style of a banana republic, the political overlords gave the order that One World Trade Center be lit up in pink in celebration. New York is a city where 30 percent of babies are killed in the womb and where more black children are aborted than born alive.

The Democrats 25 years ago promised America that abortions would be “legal, safe and rare.” They may be legal since Roe v. Wade, but they are neither safe nor especially rare. Arguably America’s greatest mass murderer, the abortionist Kermit Gosnell, took a mother’s life as well as killing seven babies outside the womb. As to rare, the U.S. abortion industry that Planned Parenthood champions, kills at least 600,000 babies in utero each year.

For perspective, the 70,000 plus deaths last year from opioid overdoses, is deemed to be a national crisis with federal and state programs created to staunch the flow of drugs into our nations and prevent needless loss of life. But more than eight times that number are killed as a matter of choice, not addiction or accident, and the Left celebrates it and wants more. With abortion taking 41 million souls globally last year, “reproductive rights” have become the biggest killer in the world. Again, for perspective: the Holocaust took 6 million lives; the Vietnam War—on both sides—cost the lives of 1.3 million. Abortion kills more than 40 million humans in just 12 months.

The arch-eugenicist Margaret Sanger and Adolf Hitler would be most proud.

While these facts and figures are all shocking, they should surprise no one. The Democratic Party has become what it set out to be: a collective defined by a refusal to admit that eternal and objective truth exists. As Hillary Clinton’s thesis from Wesleyan is titled: “There is Only the Fight: An Analysis of the Alinsky Model.”

Quite clearly, the Democrats have fully internalized the “ends justify the means” mantra, a philosophy that when taken to its logical conclusion leads directly to the gas chambers or the abortion mills, which take tens of millions of lives per year.

As a result, the 2020 elections will not simply be about a second term for the Make America Great Again agenda. With recent state anti-abortion bills increasing in number, 2020 will be about a return to decency and a reversal of the culture of death the Democrats have embraced. 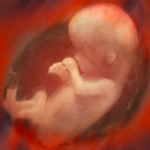 Death and the Democrats