This is one of the most important articles on the El Paso killer, from my friend Aaron Klein at Breitbart, with the truth that the media is trying to hide from you.

In recent days, major news media outlets and prominent Democratic Party politicians have wildly sought to connect President Trump’s rhetoric and policies to an unhinged manifesto attributed to the 21-year-old accused of murdering 22 people in cold blood and injuring dozens when he opened fire in a Walmart in El Paso.

The manifesto is clearly the work of a demented mind expressing views that are all over the map, yet it has been cited numerous times to divine the El Paso shooter’s alleged motives and link the mass murder to Trump. The New York Times, for example, printed a story titled, “El Paso Shooting Suspect’s Manifesto Echoes Trump’s Language.”  Rep. Joaquin Castro (D-TX) went so far as to exclaim, “The manifesto that that guy wrote could have been written by the people that write Trump’s speeches.”

A closer look at the manifesto attributed to shooting suspect Patrick Wood Crusius shows that the author did not have a coherent political viewpoint. While the text contains racist language targeting the Hispanic community, it also evidences hatred toward what the writer labeled “average Americans” and calls for a decrease in the general American population. Missing from much of the news media coverage is that the manifesto promotes far-left policy prescriptions including universal healthcare and a socialist-style “universal income.”

While the news media have sought to portray the shooter as a Trump ideologue, perhaps the two main themes of the document are actually anti-corporatist and eco-extremist sentiment. The media coverage also largely ignores that the shooter actually blames the Trump administration for a spike in work visas and repeatedly labeled both Republicans and Democrats as sellouts to corporations on a host of issues.

Below are nine key sections of the manifesto that the news media are largely ignoring in a clear effort to link Trump to the shooter’s warped ideology.

1 – The shooter stressed the environmental aspects of his motivations by naming the manifesto “The Inconvenient Truth,” clearly utilizing the namesake of Al Gore’s climate alarmist documentary.

2 – The screed ranted against Democrats and Republicans and specifically blamed corporations for allegedly fueling economic woes.

In short, America is rotting from the inside out, and peaceful means to stop this seem to be nearly impossible. The inconvenient truth is that our leaders, both Democrat AND Republican, have been failing us for decades. They are either complacent or involved in one of the biggest betrayals of the American public in our history. The takeover of the United States government by unchecked corporations. I could write a ten page essay on all the damage these corporations have caused, but here is what is important.

3 – One of the main themes inside the manifesto was anti-corporatist ideology. It repeatedly claimed that corporations were engaged in a conspiracy to replace human workers with “automation.” At one point, the shooter even writes that his life was ruined because of the purported move toward automation: “My whole life I have been preparing for a future that currently doesn’t exist,” he writes. “The job of my dreams will likely be automated.”

4 – The author repeatedly blamed corporations for “the destruction of our environment.”

One section praised The Lorax, a children’s book written by Dr. Seuss and recently made into an animated movie that focuses on the plight of the environment:

Corporations are heading the destruction of our environment by shamelessly over harvesting resources. This has been a problem for decades. For example, this phenomenon is brilliantly portrayed in the decades old classic “The Lorax”.

5 – The document claimed “many” Republican Party “factions” sold out to corporations.

6 – The manifesto promoted far-left policies such as universal healthcare and a “universal income.”

In the near future, America will have to initiate a basic universal income to prevent widespread poverty and civil unrest as people lose their jobs. Joblessness in itself is a source of civil unrest. The less dependents on a government welfare system, the better. The lower the unemployment rate, the better.

Achieving ambitions social projects like universal healthcare and UBI would become far more likely to succeed if tens of millions of dependents are removed.

7 – The document blamed the Trump administration for recently nearly doubling the number of guest worker visas this summer.

Recently, the senate under a REPUBLICAN administration has greatly increased the number of foreign workers that will take American jobs. Remember that both Democrats and Republicans support immigration and work visas. Corporations need to keep replenishing the labor pool for both skilled and unskilled jobs to keep wages down.

The shooter also complained about fresh water currently (meaning during the Trump administration) being “polluted from farming and oil drilling operations.”

8 – The manifesto blamed the “American lifestyle” for “destroying the environment of our country,” and claimed this so-called “decimation of the environment is creating a massive burden for future generations.”

9 – Far from singularly expressing ultranationalist ideology, the manifesto actually slams Americans and calls for the general population to be forcibly decreased.

Everything I have seen and heard in my short life has led me to believe that the average American isn’t willing to change their lifestyle, even if the changes only cause a slight inconvenience. The government is unwilling to tackle these issues beyond empty promises since they are owned by corporations.

Corporations that also like immigration because more people means a bigger market for their products. I just want to say that I love the people of this country, but god damn most of y’all are just too stubborn to change your lifestyle. So the next logical step is to decrease the number of people in America using resources. If we can get rid of enough people, then our way of life can become more sustainable.

Still, the manifesto claimed “even if other non-immigrant targets would have a greater impact, I can’t bring myself to kill my fellow Americans.” The manifesto presented a racist confederacy of various races instead of “deporting or murdering all non-white Americans” — an idea he said was “horrific.” And he claimed, “This attack is a response to the Hispanic invasion of Texas.” 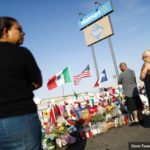