Despite the Left’s best efforts, the Second Amendment is alive and well in the commonwealth of Virginia.

It has been reported that after the Virginia House of Delegates passed a sweeping anti-gun bill, H.B. 961, which would include banning such popular firearms as the AR-15 and AK-47, a committee vote in the Virginia Senate voted to shelve the bill for the remainder of the legislative year. Four Democratic state senators sided with all the Republicans on the Senate Judiciary Committee against the bill.

This vote proves two crucial facts: First, there are at least a small handful of Democrats who are not onboard with their party’s constant shift further to the Left on every issue imaginable, which proves just how divided their party really is. And secondly, this proves that massive demonstrations like the peaceful, pro-Second Amendment rally in Richmond absolutely can have an impact on the way our elected representatives vote. This is proof that now, more than ever, such direct activism and public pressure campaigns for politicians to respect the Constitution are not only possible, but can be successful. 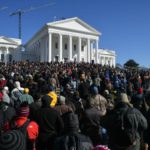