In the aftermath of an attempted attack on the American embassy in Baghdad by an Iranian-backed militia, the United States has responded with airstrikes that killed two Iranian military leaders: General Qassim Soleimaini, the head of Iran’s Quds Force, and Abu Mahdi al-Muhandis, the deputy commander of the Popular Mobilization Forces militia.

The Pentagon and White House have both since confirmed that the airstrikes were by American forces, and that they were done not only in retaliation for the embassy attack, but also because Soleimaini was planning further attacks on American assets, including diplomats and troops, overseas. The airstrikes struck Baghdad’s international airport, killing Soleimaini, al-Muhandis, and five others.

Just as with the coordinated airstrikes in Syria following the use of chemical weapons in that country’s civil war, President Donald Trump has lived up to his promise that America will continue leading the world in the fight against terrorism, and will maintain peace through strength rather than leading from behind. 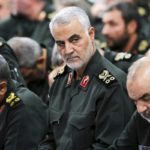