The Democrats are moving full-speed ahead, with absolutely no regard whatsoever for the good of the nation or their own political fortunes. They have announced the drafting of two articles of impeachment against President Trump: One for abuse of power, and the other for obstruction of Congress.

These charges are not only an insult to the Constitution, but they are paper-thin allegations. The extent of the President’s so-called “abuse of power” is working with a fellow democratic leader to investigate corruption, and the “obstruction of Congress” charge boils down to President Trump’s refusal to cooperate with a rigged and one-sided impeachment inquiry, one that has left out key facts and witnesses, and refused to allow the minority party its own input in terms of subpoena power.

Essentially, both of the things of which they accuse President Trump are crimes that the Democrats are truly guilty of committing, from Joe Biden’s actual abuse of power with regards to Ukraine, to the Democrats’ shredding of the Constitution to bend the rules of impeachment to their own will.

Only time will tell now if these articles even pass the House. But common sense will tell you that these “charges” have absolutely no chance of ever succeeding in removing President Trump from office. 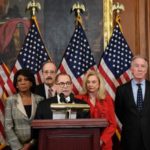