In the most stunning and blatant act of censorship in modern history, the Big Tech giant Twitter has permanently suspended the official and longtime account of President Donald J. Trump, @realDonaldTrump.

President Trump, who had used the account for well over a decade, had accumulated almost 89 million followers, making him one of the most-followed Twitter accounts of all time. His ban came without warning, without justification and despite the fact that there are still 12 days left in his presidency.

It has been reported that President Trump has already joined the largest Twitter alternative, Parler, which has led to another flood of downloads from all major app stores as more people join the more free speech-oriented platform in order to avoid such Silicon Valley censorship. 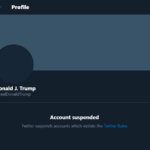