Following President Donald Trump’s fiery address at the “Save America” rally, thousands of his supporters have breached the Capitol building.

Hundreds of thousands of patriots arrived in D.C. this week from across the country for the third and final official demonstration against the widespread voter fraud that stole President Trump’s re-election victory in November 2020. Following the official rally with multiple speakers, concluding with President Trump’s speech, the crowd marched east to the Capitol Building, where a joint session of Congress was set to debate and vote on the fraudulent 2020 electoral results.

As a debate was being held over the results from Arizona, thousands of protesters stormed the barricades and overwhelmed the Capitol Police presence, entering the Capitol Building. Vice President Mike Pence and members of Congress were ordered to evacuate, as protesters entered Statuary Hall. Reports have even claimed that tear gas is being used inside the Capitol in an attempt to disperse the protesters who have made it inside.

The situation is ongoing. 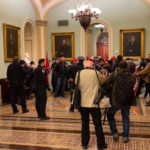