President Trump’s press conference today was briefly interrupted by reports of a shooting outside the White House, with a Secret Service agent escorting the President out of the press briefing room. President Trump, who left in a calm manner, came back minutes later to inform the gathered press – who was forced into lockdown in the briefing room – of the situation.

The shooting involved the Secret Service firing on an armed suspect at the intersection of 17th Street and Pennsylvania Avenue, just outside the White House, after the suspect had fired their weapon at another person. The suspect was taken to a hospital in critical condition, with a single gunshot wound to the torso.

After returning to the press briefing room and giving an update on the situation, President Trump was asked if he was “rattled” by the situation. The President, continuing to show his resilience, cooly responded with “Do I seem rattled?” 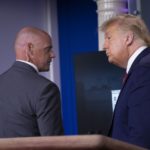