At long last, the Horsewomen of the Democrat Apocalypse have made their choices known for the 2020 presidential race. After spending months trying to decide which candidate was farthest to the Left, they made their call: Three of the four members of the so-called “squad” – AOC, Ilhan Omar, and Rashida Tlaib – have decided to endorse Bernie Sanders.

This solidifies Bernie as the candidate of choice for the most rabid of the Democratic Party’s far-left, the preferred candidate of anti-Semites and America-hating socialists. While they may have endorsed him in a last ditch effort to try to save his candidacy, their announcement may only have the opposite effect, and doom his bid to failure.

Senator Bernie Sanders (D-Vt.) is set to receive the key endorsements of three of the most high-profile Democrats in the House of Representatives on Saturday, Fox News reports.

The three congresswomen are Alexandria Ocasio-Cortez (D-N.Y.), Ilhan Omar (D-Minn.), and Rashida Tlaib (D-Mich.). They are three of the four members of a group colloquially referred to as “the Squad:” Four far-left freshmen representatives all elected in 2018, who have become major figureheads in the Democratic Party.

According to Fox, Ocasio-Cortez will make her endorsement official by appearing at a Sanders rally on Saturday. Omar’s endorsement was first posted by the Sanders campaign on Twitter, which read in part: “Bernie is leading a working class movement to defeat Donald Trump that transcends generation, ethnicity, and geography…I believe Bernie Sanders is the best candidate to take on Donald Trump in 2020.”

The endorsements are crucial for Sanders at this point in the campaign, coming two weeks after a heart attack that raised concerns about the 78-year-old senator’s health and age. He has also seen a drop in his poll numbers, falling into third place behind former Vice President Joe Biden and Senator Elizabeth Warren (D-Mass.), the latter of whom is widely viewed as sharing many of the same socialist policies as Sanders.

But despite this, he still appeared on the debate stage last night alongside 11 other candidates, seems to have maintained a level of enthusiasm among his core base, and raised over $25 million in the third quarter, marking his best fundraising quarter yet and surpassing all other Democratic candidates.

Despite being only freshmen, the three representatives are viewed as having an unusual level of power in the party. Ocasio-Cortez, who stormed into Congress by primarying out a 10-term incumbent last year, has been referred to as a “shadow speaker” who holds sway over House Speaker Nancy Pelosi’s (D-Calif.) decisions; she is widely considered a major reason for Pelosi finally caving on impeachment and moving forward with a formal “impeachment inquiry” after months of stonewalling.

The fourth member of the “squad,” Congresswoman Ayanna Pressley (D-Mass.) has not yet made an indication of who she will endorse. 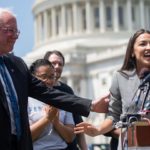