It is truly a sad day for America. The great Rush Limbaugh, the media titan who revolutionized talk radio as we know it today, has died after a long battle with lung cancer. He was 70 years old.

After an early radio career in the 1970s, he became syndicated in the late 1980s on WABC (AM) in New York City. From the 1990s onward, he consistently dominated the airwaves and easily became the most listened-to radio host in the nation. It was he who pioneered conservative talk radio, paving the way for other greats such as Sean Hannity, Mark Levin, and our colleagues here at the Salem Radio Network.

Rush was always unapologetic in his opinions on the political climate, from the Clinton years through the Obama years. The Left frequently tried to cancel him, boycott his sponsors, and attack him personally, but all attempts failed miserably. He continued to maintain more listeners than anyone else in the game, on both sides of the political spectrum, for decades. In recent years, he unequivocally supported President Donald Trump, advocating for his re-election in 2020, and highlighting both the many great things President Trump did as well as the vicious attacks against him by the Democrats.

For his historic contributions to American culture, the world of radio, and his charity work, he was awarded the nation’s highest civilian honor, the Presidential Medal of Freedom, presented to him by First Lady Melania Trump during President Trump’s 2020 State of the Union Address. 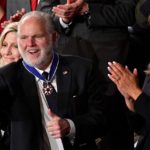