When the elite is in true danger of finally losing their power, they will fight tooth and nail to hold onto it. Nowhere is this more apparent than with the original populist revolution of our era: The Brexit referendum.

It is clear now, more than ever before, that the political elite in Westminster have nothing but contempt for the will of the people, and are not afraid to make this obvious in their legislative actions. But they resist because they know the tide is against them, and sooner or later, the results of the referendum will be respected. Brexit will happen, and if the political class would rather go down with the ship, then they will pay the political consequences soon enough.

British lawmakers have voted to postpone a decision on whether to back a Brexit deal with the European Union, throwing a wrench into government plans to leave the bloc at the end of this month.

At a special session of Parliament intended to ratify the deal, lawmakers instead voted 322-306 to withhold their approval until legislation to implement the agreement has been passed.

The vote is a major blow to Prime Minister Boris Johnson and means he has to ask the EU to delay Britain’s departure — although he has told MPs he will not do so.

“#BREAKING: Parliament has voted to delay Brexit again. The Prime Minister will not ask for a delay — he will tell EU leaders there should be no more delays and we should get Brexit done on October 31st with our new deal so the country can move on. pic.twitter.com/5EE69IuhUO

Parliament previously passed a law compelling him to do that if a deal had not been passed by Saturday.

The move is intended to ensure the UK can’t leave the EU without a deal on the scheduled Oct. 31 departure date. 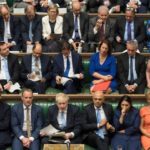