In the first legal ruling against executive action by the Biden Administration, a federal judge in Texas has put a halt to Biden’s efforts to halt all deportations of illegal aliens in the United States.

Judge Drew Tipton, of the Southern District Court of Texas, made his ruling under the provisions of the Administrative Procedure Act, which halts Biden’s anti-deportation policy for 14 days. Tipton was appointed to the court by President Donald Trump.

Judge Tipton ruled in favor of the state of Texas, where a lawsuit was filed against the Biden Administration by Attorney General Ken Paxton, who argued that Biden’s plans to stop all deportations was in violation of a federal regulation requiring the Department of Homeland Security to inform state officials ahead of time of any planned changes to immigration policy.

Tipton’s ruling said, in part, that “in light of the foregoing, the Court finds that the threat of injury to Texas outweighs any potential harm to Defendants and the public interest is served and protected by the issuance of this TRO.”

The attempted moratorium on deportations was part of Biden’s unprecedentedly large swath of executive actions since he took office, including the unprecedented 17 executive orders signed within his first week as president, which is by far the new record for the highest amount of executive orders signed by a president in their first 100 days. This could also be the first of many successful legal challenges to Biden’s policies and executive overreach, which would be a turning of the tables from the dozens of left-wing activist judges who tried to block many of President Trump’s actions while he was in office. 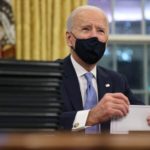