In yet another disappointing punt on one of the most important issues of our time, the Supreme Court has declined to hear another case regarding widespread voter fraud in the 2020 election.

The suit was brought by President Donald Trump’s legal team, challenging the results of the election in the crucial swing state of Pennsylvania as fraudulent, or at least highly questionable. Six justices of the court, consisting of the three left-wing judges, Chief Justice John Roberts, and “conservative” justices Brett Kavanaugh and Amy Coney Barrett, ruled that the challenge was moot due to the fact that the election has already taken place. Justices Clarence Thomas, Neil Gorsuch, and Samuel Alito dissented.

This comes after the court had previously ruled against several other prior election challenges in other key swing states prior to the certification of the results, claiming that such challenges “lacked standing.” 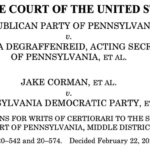