According to police reports, an SUV attempted to breach the security checkpoint at President Trump’s Mar-a-Lago in Palm Beach, Florida, making it through two security checkpoints before authorities gave chase. Shots were fired by the pursuing police vehicles before the car was eventually stopped. Two people inside the car were taken into custody.

The incident occurred at about 11:40 in the morning, outside the main entrance to the resort that has become President Trump’s personal residence and “Winter White House.” As a result, authorities are now blocking off Southern Boulevard Bridge, which connects Palm Beach to West Palm Beach. President Trump plans to spend the weekend, including Super Bowl Sunday, at Mar-a-Lago. 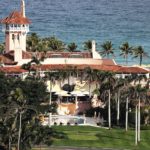