In a travesty of justice and an insult to the rule of law, the Supreme Court of the United States has rejected the lawsuit filed against the four battleground states of Wisconsin, Michigan, Pennsylvania, and Georgia, by the state of Texas and 18 other states.

The lawsuit, which was looking to be “the big one” that might save the election and our Republic, was dismissed by the Court when 7 of the 9 justices falsely claimed that Texas “lacked standing” under Article III of the Constitution. The only two justices who dissented were Clarence Thomas and Samuel Alito.

Now the only hope of stopping the steal and restoring the will of the people rests with the state legislatures in the key states, which may still choose to not certify the results of this fraudulent election. 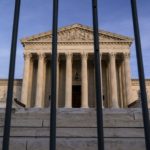