Another one bites the dust. Robert Francis “Beto” O’Rourke, the faux Hispanic and would-be gun-grabber, has withdrawn from the race for the Democrats’ 2020 presidential primary.

It was only a matter of time, as nothing he did to try to boost his image could make his campaign break even 1%. Still, he can boast the minimal contribution of forcing the Democratic Party as far to the left as possible on the subject of guns, which will surely benefit President Trump in his general election fight against whomever the Democrats eventually nominate. 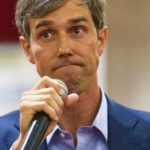