Donald J. Trump, through his official Office of the Former President, has just released a statement calling out Senate Minority Leader Mitch McConnell for his absurd false accusations against President Trump.

After voting to acquit the 45th President in the unconstitutional second impeachment trial, McConnell gave a speech from the floor of the Senate accusing President Trump of somehow being responsible for the protests that took place at Capitol Hill on January 6th. McConnell also ominously vowed that the former President could face civil charges for his nonexistent role in the protests.

Following McConnell’s speech, President Trump’s office released an official statement slamming McConnell, declaring that the GOP “can never again be respected or strong with political ‘leaders’ like Sen. Mitch McConnell.” President Trump further promised that “where necessary and appropriate, I will back primary rivals who espouse Making America Great Again and our policy of America First.”

After being acquitted, President Trump has undoubtedly secured his status as the most powerful figure in the Republican Party, and he intends to use that power in the 2022 and 2024 election cycles. That will be a win for the America First movement, and a well-deserved and long-overdue loss for the GOP establishment. 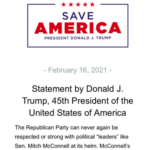