It has been reported that President Donald Trump is planning to issue a formal pardon to his former National Security Adviser, Lieutenant General Michael Flynn. The report originally came from Axios, which alleged that the President has told confidants that he will issue the pardon soon.

Lieutenant General Flynn was the first target of the disastrous “Russian collusion” hoax, which was the cover for the Deep State’s efforts to undermine and overthrow the Trump Presidency by spying on him and sending as many of his campaign and administration advisors to prison, even though no crimes were committed. Lieutenant General Flynn was charged with lying to the FBI during an illegal interrogation on the subject of Russian collusion. After General Flynn initially pled guilty to the charge, he withdrew his guilty plea following the discovery of evidence that exonerated him by confirming that the FBI agents in the interview were planning to set him up on fraudulent charges as part of a purely political operation.

The revelation of this exculpatory evidence led to the Department of Justice withdrawing its prosecution and requesting that the case be dismissed. The legal battle for General Flynn has only been dragged on by the tyrannical actions of the corrupt far-left judge Emmet Sullivan of the District Court for the District of Columbia. Judge Sullivan, a Clinton appointee with a bizarre and inexplicable personal vendetta against General Flynn, has illegally appointed himself as the de facto prosecutor in the Department of Justice’s absence, thus forcing the case to continue even though it is beyond clear that General Flynn is innocent.

President Trump’s pardon would, presumably, finally bring an end to this legal nightmare for General Flynn, once and for all. 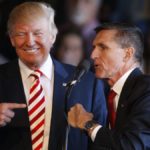