Any illusions that may have still existed about Republican opposition to President Trump completely evaporated tonight. With the primaries in Illinois, Florida, and Arizona, Donald Trump has officially secured the Republican Party’s nomination for President of the United States in 2020.

He needed just 1,276 delegates in order to clinch the nomination, out of 2,550 total delegates. With the primaries tonight, he is now estimated to have at least 1,400.

In doing so, he has left his very few challengers in the electoral dust. After disgraced former South Carolina Governor Mark Sanford dropped out before the primaries, and former Illinois Congressman Joe Walsh withdrew following the Iowa caucuses, the only remaining candidate is former Massachusetts Governor Bill Weld. Even now, Weld is projected to have earned only one delegate in all of the Republican primaries. His campaign is now irrelevant.

But even beyond this, President Trump also made history tonight. Having secured well over 10 million total votes in the primaries thus far, he has broken the record for the highest popular vote total ever won by an incumbent President in their party’s primaries. The previous record was held by Bill Clinton, with 9.7 million votes in 1996.

This shows that, even with minimal opposition in the primaries, Republican voters are still more fired up than ever before to come out and support President Trump in 2020, which bodes well for the general election in November. 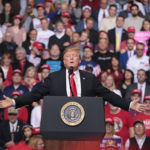